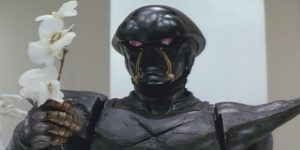 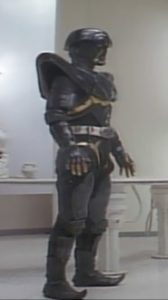 Welcome to Tokusatsu Gesundheit, where Chris really needs to check on the availability of a film before committing to it. Instead The Mysterians, we’ll be watching the post-apocalyptic Kikaider spin-off Mechanical Violator Hakaider!

A group of scavengers in a post-apocalyptic future accidentally awaken a powerful and violent android named Hakaider. Hakaider slaughters them and motorcycles his way through the wastelands to the fascist utopia of Jesus Town, ruled by the fallen angel Gurjev and his android enforcer Michael. Suffice it to say, the Mechanical Violator doesn’t quite fit in and quickly joins up with a gang of freedom fighters…until Michael slaughters them. A bloody, one-robot revolution ensues.

Hakaider debuted in a 1973 episode of Shotaro Ishinomori’s Android Kikaider TV series as the title hero’s evil rival. He’s been a fixture of the franchise ever since.  The film was directed by Keita Amemiya, a director and character designer who has worked on numerous entries in Toei’s Super Sentai, Kamen Rider, and Metal Heroes series. His most famous work is probably his creation GARO, an adult-oriented Toku horror franchise that’s become a bit of a genre staple in its own right (having run on and off since 2005). 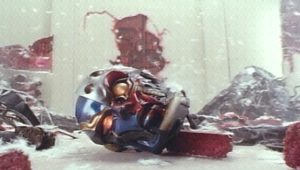 The movie puts me in mind of the kind of trashy B-action feature that would air on a UPN or a TNT midafternoon on a weekend back in the 1990s: a solid good time, but ultimately lacking any real meat on its bones. Its use of a an established Tokusatsu character is a tad inexplicable, as the film goes on to create a wholly unique backstory and world for him to inhabit, but the virtues of the recognition factor are present regardless of era or nation.