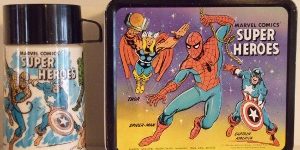 I’m hungry, but I need to write this week’s Fabulous Find.   So maybe I should combine the two!  This week I bring to you, the 1976 Marvel Lunchbox.  It’s a metal lunchbox made by Aladdin Industries and it features Marvel Comics’ characters  on all six (6) sides.  Plus it’s got a cool, plastic thermos inside that also features the Marvel comic book heroes, as well.

And hey, look what’s also inside, a peanut butter and jelly sandwich, courtesy of my lovely wife!  Well, the lunchbox didn’t come that way.  But I told you I was combining lunch with this Fabulous Find, didn’t I?  So, excuse me while I chow down and you read this post.  Feel free to get yourself something to eat, as well.

First off, here is side one, at least I’m calling it side one, as it is the lid that opens up to reveal the interior of the lunchbox. 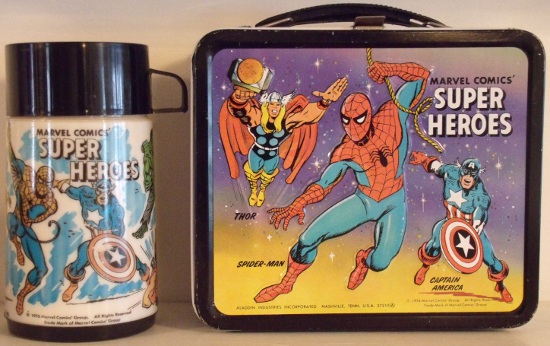 As you can see by the picture above, it comes with a snazzy thermos to keep your drink of choice cold, well at least, cool.  Or I suppose if you liked soup for lunch it would keep it warm.  I don’t think I ever, not once, took soup for lunch while I was growing up.  Did any of you?

Anyway, as you can see, side one features Spider-Man, front and center, flanked by Thor and Captain America.  I’m not sure who the artist is that rendered the artwork, but the Spidey appears to be at least modeled after John Romita Sr.‘s Spider-Man, while the Thor figure is clearly the Jack Kirby hero.  The Captain America is anyone’s guess!  Maybe a Gil Kane influence?  And just in case your friends were not familiar with the Marvel super-heroes, their names were engraved near each character for ease of identification.

Looking at the thermos, for a moment, you can see that the Cap figure is repeated on the thermos, but the Spider-Man figure is completely different.  And turning around to the right we find; the Hulk, the Scarlet Witch, Thor, Iron Man and the Vision, though you can not see them all in the picture.  But trust me, they are there!

The thermos comes with a removable, black drinking cup/cap labelled with Aladdin’s name on it’s top, and then there is also a twist-off interior cap that sealed the thermos.  This also was emblazoned with the Aladdin name.

The reverse, or back side of the lunchbox looks like this: 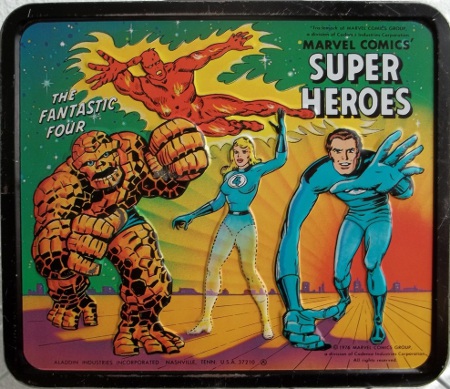 As you can clearly see, it features the Fantastic Four in all their glory!  The Thing is ready to throw a punch at anyone foolish enough to try to steal your lunch.  The Torch is ready to fire a flaming fireball at any moment.  Mister Fantastic is beginning to stretch his arms out to grab the thief and the Invisible Woman is beginning to turn invisible!  Not sure how that will keep any kid from stealing your lunch, but hey, she’s there and exhibiting her powers for all to see, or is that not see?.

I might mention that on both the front and reverse sides the heroes are stamped or punched in a manner that they are raised from the surface of the lunchbox.  Pretty cool, don’t ya think?  But that also made them susceptible to rubbing wear damage over time.

Now onto the other four (4) sides.  Though I did not scan these for you, you’ll just have to use your imagination.  On the top of the lunchbox is a handle, of course.  How else are you suppose to tote it around?  And beneath the handle, we find Hawkeye, the Vision and the Wasp, Avengers all.

Let’s now flip the lunchbox so that we are looking at the bottom.  There we find Iron Man and the Falcon.  Hey, even Red Wing is included with the Falcon!  The Falcon is in a kind of funky pose, but it looks like he’s maybe imitating Red Wing, or something.  Or maybe he’s just getting ready to take off.  Iron Man is already in full flight for the record.

And on the final side, to the left of Thor on the front, we find Dr. Bruce Banner in a pose capturing his transformation into the Incredible Hulk.  I get the feeling that this might have been copied from a Jim Starlin drawing, though the final Hulk figure definitely has a Jack Kirby feel to it.

My lunchbox is in pretty good shape, at least the exterior (and that’s what matters).  It shows a little rusting on Mr. Fantastic’s hands, as well as the Thing’s hands.  And of course, it’s got a few scratches on the black borders on each side.  The interior is not quite as nice, as it shows quite a bit of rust stain and the thermos has some rubbing removing some of the artwork, as well.

One pretty cool thing is that the kid who originally owned the lunchbox before me, has his name still on the inside, as well as his phone number.  I wonder if I called that number is he, or one of his family members, would still be there?  I would guess, unlikely.

That wraps up this week’s Fabulous Find.  I’m down in sunny (at least I hope it’s sunny) Florida as this Fabulous Find goes to print.  But I’ll be back home next week and will be right here with a new RETRO REVIEW.  So see ya then … Be seeing you …