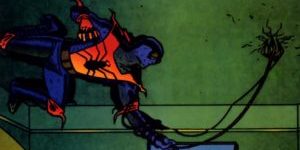 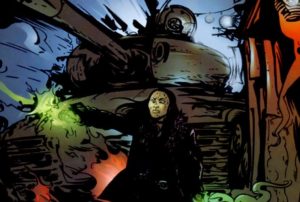 The Mandarin by Paul Pope

Welcome back to Strange Times & Places, where this week you’re in for a bit of a mind-flip, because we’re looking at Timeslip: The Collection.

This is a slightly strange example, since it’s a For Want of a Nail story…applied to the real world. Timeslip was a feature that ran in Marvel Vision, Marvel’s official fanmag of the mid-90s, which posed the question “What if….modern artists had worked with Stan Lee to create Marvel’s classic characters?” It eventually diverged somewhat from that premise, the overall idea was modern creators (including the likes of Jeff Smith, Cully Hamner, Dan Jurgens, Paul Pope, and Bill Sienkiewicz) reimagining Marvel heroes of the Golden to Bronze ages. 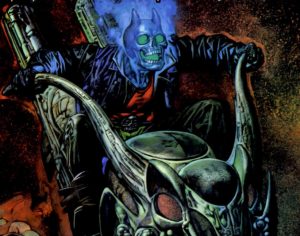 As implied above, there’s no one story here (not unlike the later Millennial Visions oneshots in that regard.

The text pieces with the first five pin-ups are written as though Stan Lee is giving the artists the summary of the character, backstory unchanged from the main Marvel U.

Join me next week for another installment of Tokusatsu Gesundheit!