RETRO REVIEW: The Monster of Frankenstein # 6

Welcome to another Friday edition of Greg Turner’s Retro Review!  This week, I thought I’d stray again from the super-hero genre and look at the monster genre.  Specifically, Marvel Comics‘ The Monster of Frankenstein # 6, cover dated, October 1973.  The first five books in this series were published as The Monster of Frankenstein, but maybe Marvel wanted to get the name Frankenstein at the top of the masthead, rather than the generic, Monster.  I don’t know for sure, but it sure seems likely!

The comic is written by Gary Friedrich and both the pencils and the inks were supplied by the excellent,  Mike Ploog.  The cover is also by Mike Ploog and looks like this: 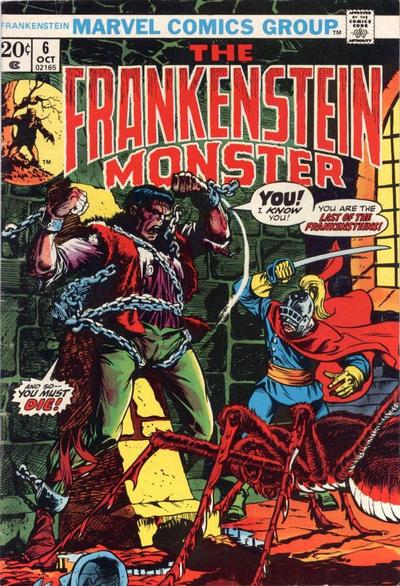 The comic opens with the  Monster seeking out the last of the Frankensteins and so he returns to his creator’s birthplace, Ingolstadt. Before he reaches the dilapidated ancestral castle, he comes across a young lieutenant from the village. The soldier is investigating some missing prisoners and suspects they might be in the castle. Although the Monster means the man no harm, he finds himself attacked and fights back. The soldier is knocked unconscious and the Monster enters the castle.  Please note that the Monster is not a simple-minded brute, but is an articulate being, which is more in line with the original novel, rather than popular movies of Hollywood!

Inside the castle, the Monster finds nothing but ruins. He’s about to give up when he hears a sound and spies a group of strange men marching along a dark corridor. The men are deformed and he concludes that they must be the work of a Frankenstein. They carry a bound man, whom they drop in a pit. Suddenly a man in a uniform in a visored helmet shows up, barking orders. The Monster decides to confront him, convinced he must be his creator’s descendant. The masked man sics his servants on the Monster, and despite his strength, their sheer numbers bring him down. Just before he blacks out, he falls to the edge of the pit- and sees a gigantic spider!

The Monster awakens, chained to a wall in the cellar. His captor tells him that he too will become a mindless servant; the spider feeds on men’s souls, leaving them husks of men with no wills of their own. The man leaves and the Monster struggles with his chains.  He manages to pull loose one of the stones he is chained to, but when he does, a stream of water squirts through a crack! The Monster is stuck to wonder whether he should risk flooding the cellar with water or waiting until the man returns to take him back to the pit. As he ponders this, the young lieutenant he faced at the beginning of our story arrives on the scene. None too bright, he accuses the chained monster of killing the missing prisoners.

The Monster tells him about his captor and the spider in the pit. The soldier sees the spider. but refuses to believe a Frankenstein is responsible, and tells him that “Jason Frankenstein left here more than 20 years ago!”

Right at that moment the mysterious masked man re-appears with his mob of soulless men. He is quickly revealed to be the colonel in charge of the prison. The colonel and the lieutenant engage in a sword fight while the Monster strains to break his chains. As water begins pouring into the chamber, the spider crawls out of its pit and comes towards the two men. The colonel, completely insane, believes he can control it. The young soldier implores him to leave with him but he ignores him. The Monster urges the young man out, telling him he will take care of the spider, even if it costs him his life.

The colonel is carried down by the weight of his helmet and drowns. But the spider survives and grabs the Monster, squeezing him and carrying him back under. After several panels the Monster manages to break free of the arachnid’s clutches and he wraps his chains about it, choking off its oxygen supply. But all is not peachy for the Monster -he needs air and he needs it fast. Things are looking grim -can a dead man die again? – when suddenly the chamber explodes in a great water spout that hurls the Monster up and out. Now free of the castle, the Monster looks back and wonders where he will find the last Frankenstein.

I am not a huge fan of horror and the whole  Hollywood monsters genre, but I must give this comic a rating of four (4) out of five (5) Legion Flight Rings, as it is a terrific tale, written by Friedrich and has glorious artwork by Ploog!  This was a team made in heaven!  But alas, this was the last issue of Frankenstein that they worked on together.  Ploog, never the fastest artists, had over committed himself and therefore  had to drop a book to keep up with his other assignments, so this was his last issue of The Monster of Frankenstein!  And it was my last one as well.

Here’s what the pencilled version of the heading looks like if you’d like a better look at Ploog’s wonderful artwork. 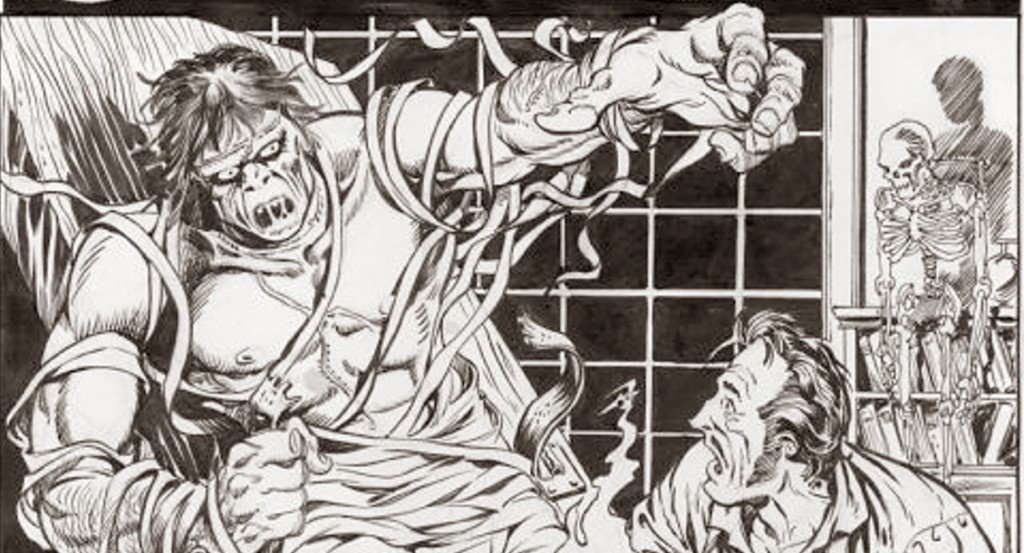