Cover dated June 1978, Marvel Comics published Ms. Marvel # 18.  This comic features a nice Dave Cockrum cover, showing Ms. Marvel flanked by fellow Avengers, Scarlet Witch, the Wasp, the Vision, Yellowjacket and Wonder Man with a cover blurb that states; “Even Avengers Can Die!”  That would make most comic book buyers take a second look, don’t you think?  Well, I sure did!

The actual title of the story is; “The St. Valentine’s Day / Avengers Massacre!”.  Maybe not as eye grabbing as the cover blurb, but still catchy, never the less!  It’s written by X-Men scribe, Chris Claremont, and it’s pencilled by Jim Mooney, who spent quite a bit of his career providing inks over other artist’s pencils.  The inks this issue were supplied by Ricardo Villamonte. 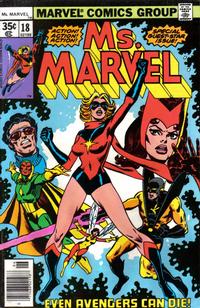 The action starts immediately, as on the splash page, Ms. Marvel is attacked while flying over New York City, on the way home from an impromptu snowball fight staged by the “Woman” magazine staff, where Carol Danvers, aka, Ms. Marvel, works!  Of course that was from issue number seventeen (17), so is you want to check that out, you’ll have to search out that issue.  But, back to the non-stop action of issue number eighteen (18), as Ms. Marvel falls to a rooftop, we see Janet Pym, aka the Wasp,  and Wanda Maximoff, aka the Scarlet Witch,  out on the town, on a shopping spree.  They witness the attack and spring to the aid of Carol.  As the villain, Centurion, gets the drop on Ms. Marvel, the Wasp is quickly at her side to distract the villain into going after her first!

Then the Scarlet Witch springs into action, as well.  Centurion manages to get the upper hand on the two female Avengers, but the Wasp is able to call for help from the rest of the Avengers!  Soon the Vision, Yellowjacket and Wonder Man appear in answer to the Wasp’s S.O.S.  Centurion K.O.s Yellowjacket and the Vision, but it looks like Wonder Man is able to stand up to the villain, much to the surprise of both!

All these distractions have allowed Ms. Marvel to recover and she finally springs into action, as well.  Unfortunately, it appears that Centurion is able to sense her everyone move, as well as, where she is at all times!  Making it quite difficult for Carol to gain the upper hand.  In fact, she’s on the ropes and changes into her alter-ego to blend in with the escaping crowd.  This seems to work, as Centurion loses her.  Though Wonder Woman swoops in to save her, thinking she just a woman who failed to flee.

Centurion contacts “his boss” for instructions and it turns out he is taking orders from Raven Darkholme, aka Mystique, before she acquired that name in the Marvel Universe!  And she is also working for another shadowing figure, un-named in this issue.  He tells her to call off Centurion, but Raven chooses not to call off Centurion!  Then the comic jumps into space, to the throneworld of the Kree Empire, for a single page and the reader sees the return of the missing Kree Supreme Intelligence!  This sidebar will be returned to in future issues, but that’s it for this issue.

Ms. Marvel determines that the villain is only able to sense her when she’s wearing her Kree made costume, so she quickly finds something else to change into, like a one-piece swimsuit, and dons that to confront Centurion.  She lures him to a power plant, where she rigs up a magnetic field, and uses it to short circuit Centurion’s weapon and thereby defeats him!

Quite an action packed issue with the Avengers guest-starring!  Though the villain is rather week and not one that ever returned, as far as I know, and the art by Mooney and Villamonte is just okay, so I have to give this comic just two (2) out of five (5) Legion Flight Rings!  Far from a bad issue, but even further from a great one!

Two issue later, in issue # 20, after meeting up with Captain Marvel in issue # 19, Ms. Marvel would permanently adopt a new costume.  Here’s a peek at that costume!  Personnally, I think it was an improvement!  What do you think?