Last week, as you’ll remember, I confessed my fanboyish excitement over Marvel’s upcoming Avengers vs X-Men storyline (or AvX, as it’s trending, which I have to say sounds cool and is much easier to repeatedly type). But I tempered that excitement by challenging Marvel’s boisterous claim that this so-called event is going to be “the biggest comic book event in history”. Really, Marvel? Two super teams fighting each other is going to be bigger than, say, your own Secret Wars event from the 80s? Or your own Fantastic Four #1 from 1961, which set the groundwork for the modern day Marvel Universe? Or your competitors’ Action Comics #1 from 1938, which forever defined the superhero archetype from every publisher since?

Good luck with that, Marvel. I guess this is going to be pretty good. I’m holding you to your outlandish claim.

Anyway, in case you don’t remember, here’s the last installment of I Will Tell You, where I discussed all of this at much greater length. And you might not remember, because it really wasn’t last week; it was actually two weeks ago, but I just like lifting that old voiceover that kicked off many an episode of Lost in Space. Ah, rest in peace, Dick Tufeld.

Anyway again, being a longtime Avengers fan and onetime X-Men fan is reason enough for me to anticipate this story as a fan, if not a critic. Now, many of you have asked where I stand on the conflict, and because you asked so nice, Sweetheart and Mom, I will tell you. Even though, I already let my stand be known in that previous column. But for those for you who didn’t read it (I forgive you) and for those of you who didn’t clink the above link (thanks for sticking around), here it is. 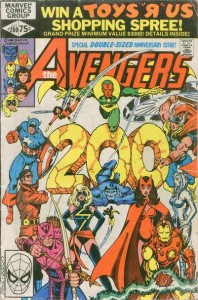 I became an instant Avengers fan when I first got into comics in the late 1970s, and remained one through the end of the David Michelinie run in 1980 or so, after which the quality of the title dropped precipitously and my interest quickly waned. It wasn’t until Kurt Busiek took over as writer and George Pérez finally returned to the title in 1998 and kicked off an incredible but underrated and largely forgotten run that I also returned as a reader, and have remained an Avengers fan ever since. 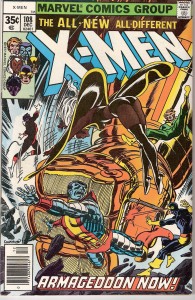 The first issue of Claremont & Byrne's stellar, or interstellar, run on Uncanny X-Men.

And around the same time I first got into The Avengers, Chris Claremont and John Byrne had begun their legendary run over on Uncanny X-Men, and it didn’t take long for me, or the rest of comics fandom, to notice. So I quickly became an X-Men fan, too, but unlike The Avengers, the quality of this title remained intact largely due to Claremont’s tenure. And when Claremont did part ways with the franchise, it was adeptly handled by writer Scott Lobdell for many years after.

But when Lobdell, too, left the title in the late 90s, subsequent writers were unable to tackle the franchise’s detailed history and character dynamics the way their predecessors were; even Claremont himself when he eventually returned was unable to regain his former grasp of the title. A slew of new titles, new characters, and new creators only served to drown readers in a torrent of mediocre stories, and this mentality is what forever drove me from being a faithful follower of Marvel’s not-so-merry-anymore mutants. A few bright spots have since shone; Grant Morrison’s early New X-Men run and Joss Whedon’s Astonishing X-Men among them, but they have been rare and atypical of what otherwise has since come to pass for an X-Men story. 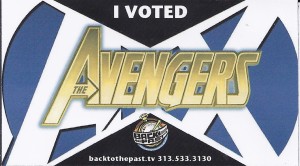 Had you attended B2TP's AvX event and voted, you too could have gotten one of these fridge magnets.

So to categorize it, I considered myself fans of both The Avengers and The X-Men through 1980, solely an X-Men fan through the mid 90s, a fan of neither for a couple of years in the late 90s, and then I permanently switched to Avengers colors ever since. And this is why, when asked by Marvel to choose a side for this fabricated event, I chose The Avengers. And I guess an anecdotal piece of evidence that shows I’ve backed the right horse would be Back to the Past’s own recent AvX rally, coverage of which can be found from within, and without.

Although, as any political junkie knows, popular opinion can change and the actual outcome can be quite different, no matter how many exit polls are taken. So next time, I’m going to switch from the role of fan and reader and instead speculate on the editorial reasons for this event, and how these reasons may or may not provide some insight as to whom the true winner might be. Stay tuned!

Category: Comic BooksBy Jim JohnsonFebruary 21, 2012Leave a comment
Tags: I Will Tell You