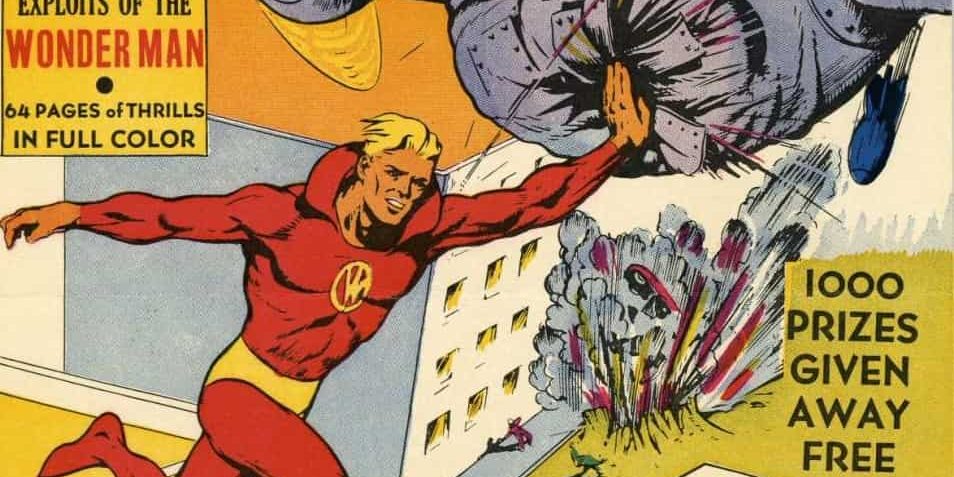 Welcome back to My Hero! Each week, Back to the Past uses this column to tell you why the obscure characters from our custom action figure collection are great! Years ago, we purchased the life’s work of an artist and comic fan whose chosen medium was granting forgotten comic characters the action figure immortality denied to them by major toymakers. We’re still sorting through it all, and we’re making new finds every week! This week’s find, who will soon be available on ebay, is a true one-appearance wonder – the original Wonder Man! 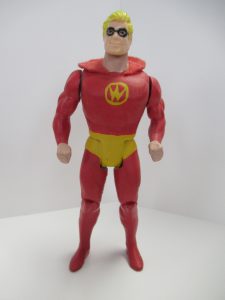 Wonder Man as he appears in our custom figure collection.

Fox Features Gets On DC Comics’ Bad Side

Wonder Man, AKA Fred Carson, debuted in Wonder Comics #1 circa May 1939. While traveling abroad, radio engineer Fred Carson encountered a holy man who put him through a series of rigorous tests. Passing them all, Carson was gifted with a magic ring that granted him amazing powers. He used those powers to turn back the occupying forces in the Eastern European nation of Tarovania.

What are those powers? Well, he’s faster than a speeding bullet, more powerful than a locomotive, able to leap tall buildings in a single bound… 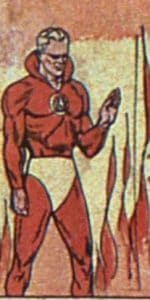 Wonder Man from the Title Page of his only appearance.

Yeah, Wonder Man was basically a rip-off of DC’s still fairly new hit Superman. Same powers, similar name, heck even his day job at a news station was pretty familiar. After only one issue of Wonder Comics had hit stands, DC took Fox Features Syndicate to court. Will Eisner, whose studio had been commissioned to create Wonder Comics for Fox and the writer/artist behind Wonder Man, was called to testify. In his later years, Eisner would claim that he had been honest on the stand. Victor Fox wanted his own Superman and Eisner had delivered exactly what was requested. DC won the case, and Fox ceased publication of the character immediately. Ironically, DC Comics would later come to own Fox’s hero The Blue Beetle.

However, after Eisner died, comic fans got their hands on the actual court transcript. And it appears that future industry legend Will Eisner was, shall we say…excessively lax with the truth on the stand during the lawsuit. He testified that he’d conceived of the character before Superman’s debut, and was actually most inspired by The Phantom. If you can’t see how a mysterious, gun-toting jungle hero could be the inspiration for a brightly colored, well, superman, you’re far from alone. It seems that Eisner decided to lie for his employer, but did it unbelievably badly. A fair compromise for a twenty-two year old between a rock and hard place.

His status as a one-appearance wonder has made Wonder Man obscure even amongst Golden Age heroes now in the public domain. He appeared in a gallery of such characters in the extras section of the first Project Superpowers trade, but never appeared in the series itself. None of the other usual suspects, like AC Comics, have used him either. 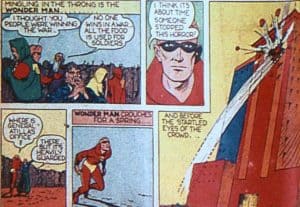 Amusingly enough, DC created their own Wonder-Man a couple of decades later. He was a blonde haired hero with powers perfectly matching those of Superman who sought to show up the Man of Steel. He turned out to be a Superman robot that had been reprogrammed for evil before developing a conscience. Hard not to see one as a reference to the other, but if you want either one immortalized in plastic, you’re going to need to turn to a custom action figure collection like ours. And if you’ve got collection like our Custom Action Figures – be it original art, garage kits, convention sketches, whatever – and want to bring it to market, get in touch!