The Story of the Golden Age Blue Beetle 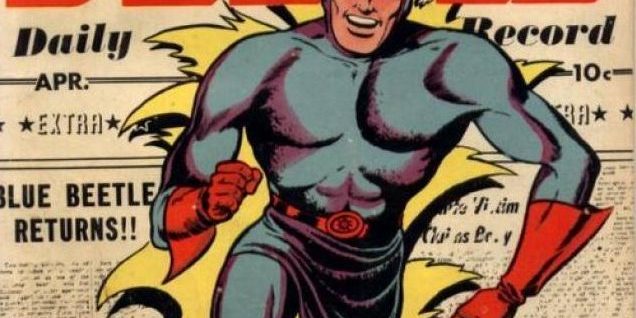 Welcome back to My Hero, wherein we here at Back to the Past identify and play hype-man for the obscure characters from our custom action figure collection. Years ago, we purchased the life’s work of an artist and comic fan whose chosen medium was granting forgotten comic characters the action figure immortality denied to them by major toymakers. We’re doing something special this month, revealing newly cataloged characters from the collection simultaneously on eBay and here on the blog. This week’s reveal is both familiar and unfamiliar, the Golden Age version of the character that would become Justice League mainstay and Teen Titan Blue Beetle. 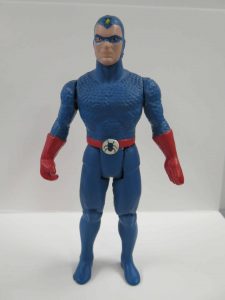 The Golden Age Blue Beetle, as he appears in our Custom Action Figure Collection. We think the torso is Super Powers Aquaman

While Blue Beetle has been a DC Comics fixture for the last thirty-five years, he was very famously a fixture of Silver Age Charlton Comics before DC bought him.  However, Charlton’s version was not the original either. The character originated in the Golden Age at Fox Features Syndicate, and is actually about as old as Batman.

Debuting in Mystery Men Comics #1 in 1939, rookie police patrolman Dan Garret moonlights as masked crimefighter The Blue Beetle to battle crooks who evade the grasp of normal policemen. His costume evolved considerably over the course of his early adventures. His earliest appearances featured him dressing like The Green hornet. As superheroes grew in popularity, he donned a blue bodysuit with an open-faced cowl. The final touches were a domino mask and some detail to suggest chain mail armor. It initially had yellow accents (belt, boots, gloves) but soon switched over to the red that would be the character’s usual into the Silver Age, as seen on our action figure. 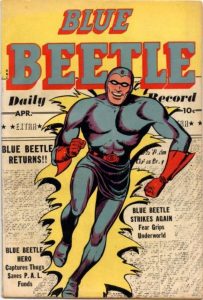 As you can see, our customizer nailed Blue Beetle’s classic look.

This Blue Beetle was most similar to the famous Ted Kord version of the character in his early days. He was a non-powered adventurer who relied on his fists and a few gadgets to battle crime. In lieu of a flying Bug, Dan Garret had a nifty Beetlemobile that he hid behind the pharmacy of his friend/mentor Dr. Franz. Franz. Far from being an average neighborhood pharmacist, Franz developed Blue Beetle’s bulletproof chainmail costume…and eventually gave him superpowers using the mysterious Vitamin 2X. He kept Dan’s supply of the strength-enhancing “vitamin” carefully controlled and the effects were temporary, making it similar to early DC Comics hero Hourman’s Miralco.

Blue Beetle proved on of Fox Features Syndicate’s most popular superheroes. He lasted through all thirty-one issues of Mystery Men Comics, quickly being spun off into his own series. He was even licensed out to CBS radio in 1940 in attempt to replicate the success of The Adventures of Superman radio show. It didn’t work out in the long run, but the series ran weekly from February to September. His solo title ran until 1950, by which point superheroes in general had died out.

From Blue Beetle to Nite-Owl

When Charlton Comics revived the character in 1964, it was as archaeologist Dan Garrett (note the second “t”). Dr. Franz and Vitamin 2X were out, a magic scarab from the Middle East was in. It was this version that famously served as the mentor of Ted Kord and was incorporated into the DC Universe – though over the years he’s gained some traits of the original (most notably era of operation).

That said, the Golden Age version was a very direct influence on Alan Moore’s original Nite-Owl in Watchmen. In fact, there’s very little difference in general circumstances between them – all Nite-Owl’s missing is Dr. Franz. Even so, Dan Garret and his public domain Fox Features adventures remain obscure. if you want this Blue Beetle on your shelf, you need the My Hero collection. And if you’ve got collection like it – be it original art, custom action figures, convention sketches, whatever – and are looking to sell it, we would love to help you, so pop some Vitamin 2X and get on it!