Hello, hello, hello and welcome to this week’s RETRO REVIEW!  It’s been quite a while since I wrote about one of my all time favorite fictional characters, the Shadow, so this week I’ve dug around in the DC Comics wing of my comic book vault and brought to light The Shadow # 2, cover dated January 1974.  It features a very cool cover pencilled and inked by artist, Michael Kaluta.  Here tis, for your enjoyment: 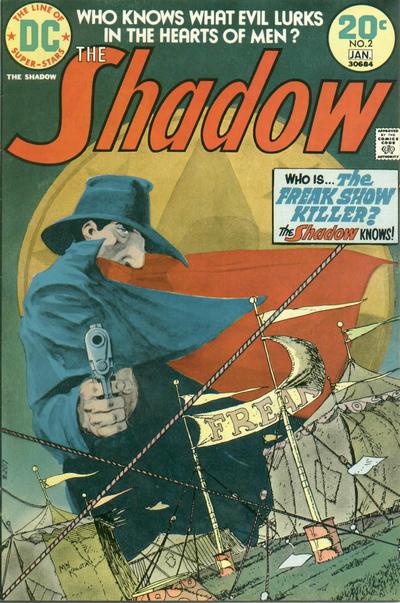 As you can clearly see, the cover image sports a giant Shadow image looming over a deserted circus or carnival.  You can also see the artist’s signature on the tent in the foreground, beneath the Shadow’s menacing 45, which is pointed directly at the reader!

The story is entitled; “Freak Show Murders” and it is written by Denny O’Neil.  The interior artwork is done by the cover artist Mike Kaluta, both pencils and inks, so it’s a beautifully drawn story.

One thing I really like about this short (only twelve issues) series is that DC and writer, O’Neil, decided to set the stories in the 1930s, rather than trying to bring the character into modern times.  The Shadow is a character of his times and really needs to have his stories set then.  Add these stories by O’Neil and Kaluta are really wonderful.  If you have never read them, you really should seek them out and add them to your collection.

The writer and artist team only worked on the first six issues (well actually, 0n five (5), issues; one (1) through four (4) and issue six (6)) before DC replaced Kaluta, though O’Neil continued to write the book.  Frank Robbins replaced Kaluta on issues five (5) and seven (7) through nine (9), then E.R. Cruz replaced Robbins on issues ten (10) through twelve (12), the final issues in this series.

But back to issue number two, the reason why we’re here.  Things start with a nice splash page featuring the Shadow in the central large panel and all of the various carnival characters that appear in this issue.  Each of the characters are shown with head shots surrounding the Shadow which also includes a short explanation of their background, for example; Benzare, a knife-thrower with a nasty temper!

The story begins on the second page, with Steve Kilroy visiting a Mister Milton Treft.  Kilroy pays Treft a million dollars for a statue made from “Alumite”, a substance new light-weight metal with the strength of steel.  The statue is the only example of the metal and their is no remaining formula for forging the metal.  Kilroy hopes his company can reverse engineer the statue’s Alumite and discover the formula.

At this moment a harlequin/clown burst in and shoots Treft, and Kilroy jumps through a window and escapes, fearing for his life!  Suddenly the Shadow makes his appearance and a gun battle begins between our hero and the harlequin’s thugs that are also now revealed.  During the battle the harlequin escapes with the statue.

The Shadow calls Burbank, his contact man, and has him send Margo Lane to join the Sorber Carnival in a town named; Titusville.  Margo manages to secure employment as Spidora, the human spider, with a body of a spider and the head of a lovely woman.  O’Neil then introduces the rest of the carnival’s freaks to Margo and to the reader.

Shortly Margo discovers that one of her fellow freaks, the wildman, Ajax, is really Steve Kilroy in disguise.  The Shadow appears and enlists Kilroy.  A shot rings out and the Shadow rushes to the snake charmer, Alhambra’s wagon, only to find her dying, before she can reveal the harlequin’s identity.

But don’t worry, the Shadow has the murderer’s identity figured out and he reveals the killer to the rest of the carnies!   The killer flees, but is trailed by the Shadow.  The big finish takes place atop a giant whale which has been loaded to the train which will take the carnival to their next destination.

Without revealing the identity of the harlequin, I will say that the Shadow comes out on top and the train rattles on with the last words of the story being … “The Shadow Never Fails!”.

A pretty nifty story with excellent art.  I highly recommend this series and especially the issues drawn by Kaluta.  For those not into individual issues, the five (5) Kaluta drawn stories were reprinted, along with a brand new story written by O’Neil and drawn by Kaluta in a hardcover book put out by DC Comics in April, 1989, entitled; “The Private Files of The Shadow”.  This book, which I also own, has a terrific new cover by Kaluta.  Unfortunately, this book is long out of print.

Hope you enjoyed this edition of RETRO REVIEW and please return next week for another new Fabulous Find.  be seeing you …