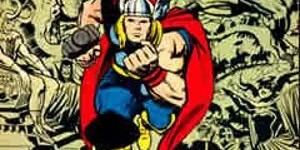 Howdy partners!  And welcome back for another Retro Review!  This week in honor of the new Thor movie, I thought I’d pull out a Thor issue, which actually turned into three issues!  So heads up, I’ll try to make it quick … I’m looking at Marvel Comics’ Thor # 167 through # 169, cover dated, August 1969 through October 1969.

First up is Thor # 167 and it has a nice John Romita Sr. cover!  He did both the pencils and inks for this beauty!  He must of liked it himself, as he signed it!  Check out just below Loki’s left foot and just above the story’s title! 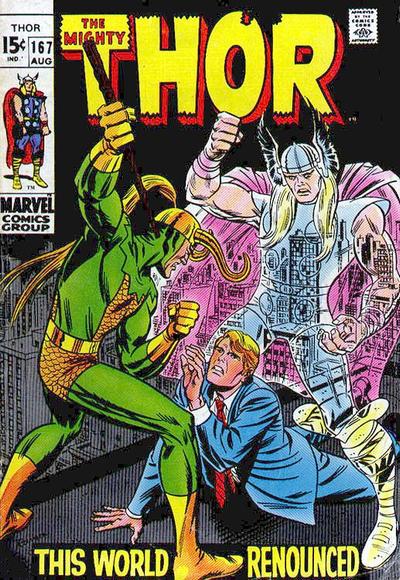 And as the cover states, this issues is entitled; “This World Renounced!”  Written by Stan (the Man) Lee and pencilled by Jack (King) Kirby, with the inks provided by Vince Colletta!  The story opens with Thor on his way to see daddy, Odin, who is about to punish his son once again!  Apparently in the previous issue, Thor had succumed to “warrior madness” and Odin has ordered him to appear and stand forth for punishment!  Of course, we’ve seen this before!   Thor gets a chance to see his best bud, Balder and his gal, the Lady Sif, attempt to stand up for him, but Odin will have nothing of this.

Balder decides to go to Midgard, i.e. Earth, and stand in Thor’s stead, during his punishment.  As he appears on our world, he is struck down by Loki, with the help of Karnilla and the Hag!  In the mean time, Odin has sentenced Thor to search out and bring Galactus before Odin for judging!  Odin does grant Thor one boon before leaving in his search.

Of course, Thor chooses to once more visit Midgard/Earth!  He arrives and discovers Balder in the hospital where he practices medicine in his alter ego of Donald Blake!  Of course, he must operate at once!  So he strikes his hammer to the rooftop and changes to Blake.  And it is at this moment that Loki strikes!  Blake battles Loki, but Loki wins easily and wrenches the cane from Thor with the intention of striking it and changing it to the mighty Mjolnir, so that he will command the hammer for all eternity!

But Odin steps in, and tells Loki that if he commands the hammer, it is he who will have to go after Galactus!  Loki flings down the cane and Odin sweeps him from Earth!  The issue ends with Blake operating on Balder, saving his life!

The cover to this book is drawn by Jack Kirby and the inks are done by Joe Sinnott, featuring Thor battling Galactus!  Take a peek: 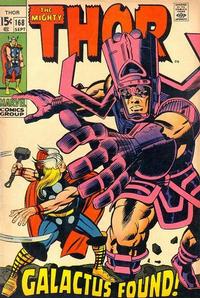 Again the story is by Lee, with pencils by Kirby, but this time the inks are done by George Klein.  The title of this issue is; “Galactus Found”.  The book opens with Thor departing on his Galactus quest.  Then for a couple of pages, we see what’s happening with Balder, who has now been joined by the Warriors Three, Fandral, Hogan and the voluminous Volstagg!  Then we get five pages of a new menace at a secret atomic experimental center somewhere in the Orient!

Then just as fast as I can type these words, Thor has found and overtaken Galactus!  But it seems that Galactus has trapped Thor and not the other way around!  Thor readies for battle, but Galactus has other plans and unleashes a “visi-cloud” which renders Thor immobile and enables Galactus to show Thor visions.  And what are the visions, you ask?  Well, would you believe the visions are of the Watcher!

In a story entitled; “The Awesome Answer!”  Stan Lee, Jack Kirby and George Klein provide to us Marvel maniacs, the origin of Galactus!  Here’s that cover, as drawn by Jack Kirby, everything, but the Thor figure that is within the Galactus outline, that was drawn by John Romita Sr.  Romita and Klein provided the inks: 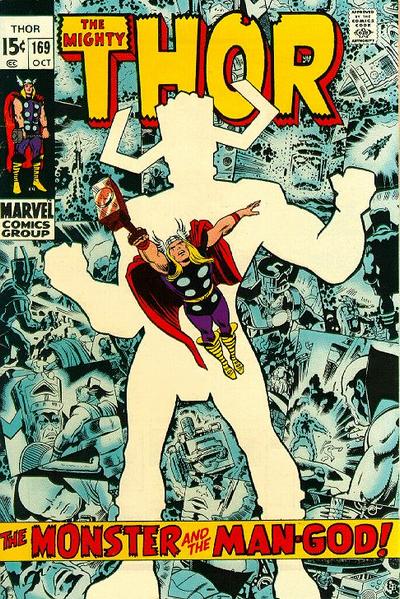 It seems that the big guy was a member of a space ship crew, who crashed, and that man that became Galactus, was the only survivor, even though he was the closest crew member to the deadly radiation of the ship’s core!  Or was it from the radiation of a sun, that the crew was heading towards, when fleeing their doomed planet of Taa!  The story really contradicts itself.  I think Stan had to do the best he could with the art that Jack provided.  And as Kirby was winding down at Marvel, he sometimes messed up like this!

Anyway, we the reader, get to witness the birth of Galactus, along with the Watcher.  In fact the Watcher has the chance to strike down Galactus before he becomes to powerful, but simply stands in the presence of “power enough to shatter a planet”, knowing that soon the hunger will soon be so great that only a world can appease it!  The Watcher says that Fate has so decreed it and he may one day live to regret his decision, to not kill Galactus when he had the chance!

After learning Galactus origin story, Thor again stands ready to battle G!  But Odin appears and tells Thor that his task is done and he has done it well!  Apparently Odin just wanted, or needed, to know Galactus’ origins, and that Galactus’ “time has not come!”  Odin sends Thor back to Midgard, where the menace from the Orient has reached New York and has defeated Balder and the Warriors three!  The menace is the Thermal Man, but that’s a story in the next issue, not this one.

The bottom line is that Thor has served his penance and is once again in the good graces of his father, Odin.  Who has sent him back to Earth to act as our protector once again!  Nicely wrapping up this three issue arc!