The Loved Ones Isn’t Loved, but It’s a Friend With Benefits 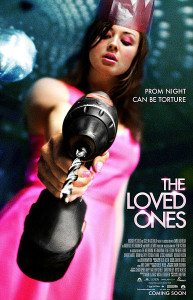 The Loved Ones is an Australian horror film from 2009. It was written and directed by Sean Byrne. It stars Xavier Samuel, Robin McLeavy, John Brumpton and Victoria Thaine.

I watch a lot of horror movies. I might watch too many horror movies according to an uneducated onlooker. That being said, I see a lot of crappy horror movies. Whenever I hit a streak of junk I usually find myself typing “best horror movies ever” into a Google search bar. I spend most of the time reading the results by saying, “I’ve seen it”. Once in a while I find a couple that I haven’t seen. One fateful day I came across a list of the top ranked horror movies on Rotten Tomatoes. On that list was The Loved Ones. What caught my eye was that it was rated as 98% fresh. 98%!? That’s a mighty high rating in my book. I had to see this film!

The Loved Ones is about a young man named Brent (Xavier Samuel) struggling with the tragic loss of a loved one. He has plans to take his girlfriend Holly (Victoria Thaine) to prom, which naturally means he would have to turn down any other incoming offers. Since Brent is no two-timer, he turns down such an offer. This ends up leading to one really crappy night.

Full of Fun and Potential

The Loved Ones is a nice mix of teen drama and suspense. It’s beautifully shot and the acting is pretty solid. There isn’t much to the plot, but the cast and crew took the ball and ran with it. They definitely made a lot out of a little instead of trying for too much and coming up short. For this I applaud them. It’s shot very nicely and gives you a good amount of “holy crap!” moments balanced nicely with some relieving laughs. The comic relief is what really makes this movie work. If they didn’t give us the contrasting emotions I feel like The Loved Ones would have felt more like a fling rather than a lasting relationship.

The filmmakers didn’t use the gore sparingly in The Loved Ones, but they didn’t use it as a crutch like we see in many modern horror films. There were a lot of good things going on in this movie that I really liked and was impressed to see. I went in not with optimism or pessimism, but with caution. A movie with a 98% rating after hundreds of people have rated it isn’t something to be taken lightly. When it was all said and done, I enjoyed it.

The Loved Ones won’t be making it on to my “best of” list, but it definitely gets an honorable mention. I look forward to seeing more from Sean Byrne, because I think he has potential to make some really cool stuff down the road.