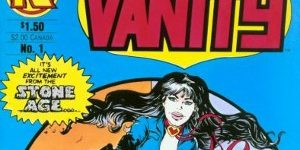 Okay, this week it’s time once again to look at a comic from one of the independent comic book companies.  So I’ve ventured down into the depths of the comic vault, off to the side, in the independent comics annix and have pulled out two issues from the short lived comic book publisher; Pacific Comics.  The comics in questions are the first two, well, actually, the only two issues of a comic called Vanity.  So here’s my review of Vanity # 1 & 2, for your enjoyment.

Let’s take a look at the cover for issue number one: 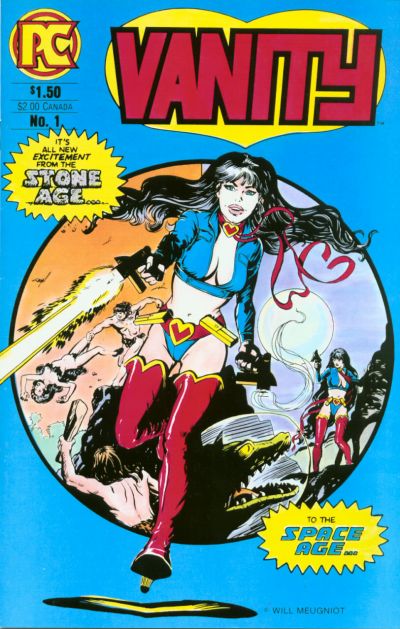 It doesn’t say the date on the cover anywhere, but it is dated on the indicia page as; June 1984.  The cover highlights the lesser known comic book artist, Will Meugniot.  Will provided both the pencil and inks for this cover.  The book itself features the cover story entitled simply; “Vanity”.  The story was written, pencilled and inked by cover artist Meugniot.  In fact the colors were done by Jo Meugniot, but I’m not sure if that is Will’s wife or possibly his sister.  Maybe if he eventually reads my post, he’ll let us all know.

Vanity is a science fiction/adventure story and it runs the first eighteen (18) pages of the issue.  I like that the opening splash page has Vanity front and center, saying “Come on guys!  The fun starts now!”  That pretty much sums up what’s to come, as well.

The story opens with the collision of a alien ship and an Earth satellite, which causes the alien ship to crash land on the Moon.  The aliens appear to be a race of intelligent lizards.  Next the story quickly jumps to the title character, Vanity and her companion, Ma’Nan fleeing from the police.  As the police close in, Vanity and Ma’Nan teleport away to their space ship, the Fallen Star.

Next Vanity teleports back down to visit a Mr. Hayden at the Office of Scientific Advancement (OSA) building in Washington D.C.  The apparent scientist is found working on a Rubic’s Cube and having quite some difficulty with it.  Vanity takes it away from him and completes it is seconds.  She explains she has already visited the Russians before coming to see the Americans.  Before anything is revealed she is forced to teleport away to go to an S.O,S. from Ma’Nan.

It turns out to be a false alarm and it also appears that Vanity, Ma’Nan and “the Professor” are having to make repairs on their ship.  Then all the fan boys get a nice half-page of Vanity in the bath, before she is rudely interrupted.  Which leads to a three (3) page flashback of Vanity in prehistoric times, living in a tribe with Ma’Nan, the son of the chieftain.  Vanity is unlike the others and this first issue ends with Vanity being thrown off a cliff.  Talk about cliffhangers, eh?

Which brings us to the second and final issue in the series.  And here is that cover: 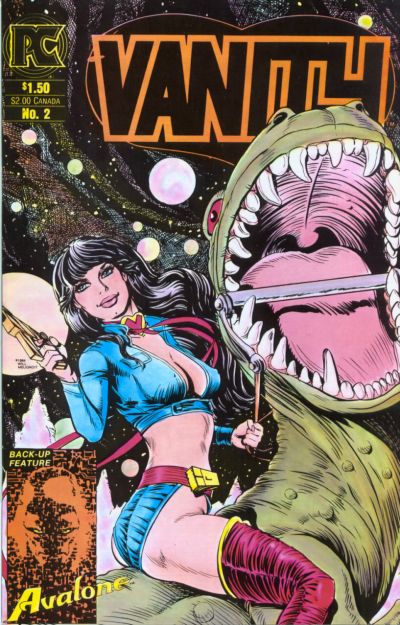 The second issue also sports a lovely cover pencilled and inked by Will Meugniot.  What’s not to like about Vanity riding a dinosaur on the cover?

The cover story, again features Vanity, in a story entitled; “A Scent Of Lilac” and it is again, written, pencilled and inked by Will Meugniot.  The story begins with Vanity and her team on her ship, the Fallen Star, but quickly switches to the flashback story where the first issuer left off.  Vanity has been thrown from a cliff, only to safely land in a lilac bush!

She struggles to survive for a few weeks until she witnesses a fiery meteor falling from the sky.  This meteor turns out to be a crashed space ship, the Fallen Star.  She investigates and finds a lone survivor.  She helps him and in return he teaches her about the ship.  But she is plotting her revenge on Ma’Nan and the tribe that threw her out.  The alien says her path is evil and that her vanity will doom this world.  It’s at this point we, the reader discovers that this has taken place on the Moon of the Earth.

The story jumps back to the present (future?) and we find Vanity racing to the Moon to confront the reptilian aliens.  But it turns out they are not out to do no good, as they are not even armed, they are a nursery!  After an expected fight/battle between Vanity’s ship and the aliens, they end up on the same page and the Professor helps the aliens get their precious cargo on to Venus, leaving some dinosaur like mounts for Vanity and Ma’Nan on the Moon.

Maybe not the best story, but it does have a happy ending!

The rest of the second issue is a twelve (12) page story entitled; “Avalone … Episode One: Survival”.  It is plotted and pencilled by David Ross, with the actual script done by David Campiti and the inks down by Dan Adkins.  It is another science fiction strip and as far as I know, the rest of this continued story was never published.

Besides the title character and the artwork done by Will Meugniot, there is not a lot about these two comics to recommend them to collectors.  But I’ve always liked Meugniot’s artwork, so that’s the reason they are in my collection.

Next week you can look forward to another Fabulous Find, and or course another RETRO REVIEW in two weeks.  Til then … be seeing you …