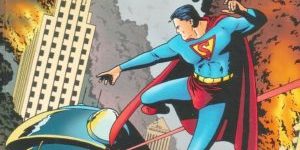 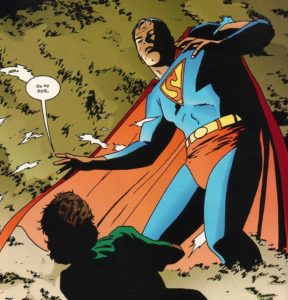 Welcome back to Strange Times & Places, where superheroes and literature often collide. Today, in honor of Halloween, we’re looking at Superman: The War of the Worlds!

This is a combo of an Imaginary Story and a For Want of a Nail story, telling Superman’s Golden Age origin story more or less faithfully until the plot of the novel/radio play kicks in. 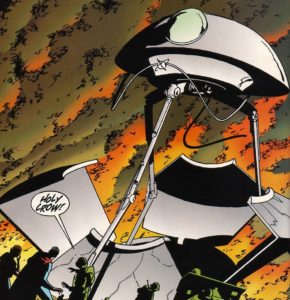 The date is October 31, 1938. Clark Kent, a young man with mysterious superhuman abilities, is given his first shot at reporting when a strange meteorite crashes outside Metropolis. He and romance advice columnist Lois Lane are dispatched to the crash site, where they discover the “meteorite” is actually a gigantic artificial cylinder – and there’s something inside. The Martians swiftly make their presence known and start ravaging the countryside – this looks like a job for Superman!

The story functions as a solid one-off tale, capping Superman’s powers at their early Golden Age levels and making excellent use of his early supporting cast. It doesn’t ignore the fact that Superman’s alien origins would hurt public perception of him during an alien invasion, showing him to be almost as feared as the creatures he fights.

This is a petty, minor quibble, but the story is very much divorced from the wider DCU. Normally, this is fine in a single character Elseworlds tale – not like Batman showed up in The Superman Monster – but DC has a fairly prominent Martian mythos of its own, several versions in fact. To not give that a tip of the hat feels like a missed opportunity.

I’m publishing this on Halloween, the 78th anniversary of Orson Welles legendary broadcast adapting “War of the Worlds”. Seeing as this comic was inspired in part by that broadcast, it seems appropriate to link you to both the original and the fiftieth anniversary remake versions of it.

IN TWO WEEKS: What if there were a Saturday morning cartoon starring Todd McFarlane’s Spawn? Find out in The Adventures of Spawn!