As promised in last week’s Fabulous Find, I have searched through my vast comic book library and unearthed Warp # 1 from First Comics.  It’s cover dated March 1983, for those of you keeping score.  If you didn’t see last week’s column, take a minute and check it out here; http://gobacktothepast.com/fabulous-find-art-of-neal-adams-volume-one/ 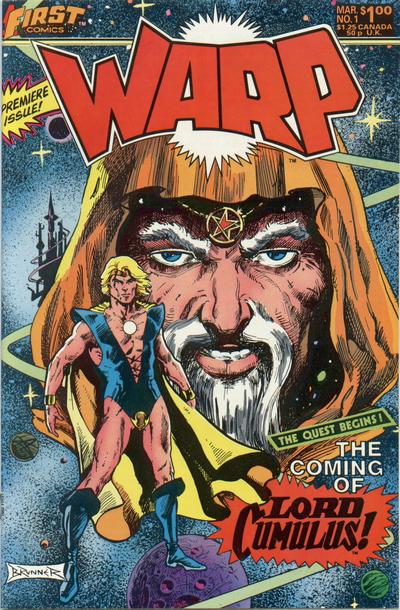 As you can see, it’s nicely drawn by Frank Brunner, who provided both the pencils and the inks.  I’m not exactly sure of the title of the story, it could be; “The Coming of Lord Cumulus!” which is clearly shown on the cover, or it could be simply; “Warp”, which appears on the first/title/splash page.  I think the former makes a better story title, but I’ll let you be the judge, in this case, as I just don’t know.

Those responsible for the story and interior art are; Frank Brunner, who is credited for the “adaptation”, as well as, the pencils.  Exactly what adaptation means in this case, I’m not sure, other than maybe adapting the stage play, written by Stuart Gordon and Bury St. Edmund (actually, Lenny Kleinfeld), to a comic book.  The writer/scripter credited for this issue is Peter Gillis.  And the inks are slung by Bob Smith.  The story runs for twenty (20) pages.

The story opens with Lugulbanda, who has searched the vast universe for eons, looking for a deliverer.  A deliverer from what, we don’t know, but by page two, and the unseen eons, he finds this deliverer on our Planet Earth.  The scene immediately switches to David Carson, a bank teller, as he interacts with the banker’s daughter, Mary Louise Bigelow.  They profess their love for each other and then David has some sort of seizure.

The reader then gets a one page flashback of David spending time in an asylum, suffering from strange visions of a costumed black man. Apparently David has recovered, but is once again struck by additional strange voices in his head.  He tries to flee from the voices and the bank, but is some how transported to another time and place.  He arrives in a costume himself.  He is also met by, Valaria, who addresses him as Lord Cumulus and tells him that he was brought there by Lugulbanda.

He quickly discovers that Valaria is no friend, but he is again transported, this time into the presence of Lugulbanda.  Lugulbanda explains that David is really the entity known as Lord Cumulus, who is the orphaned child, who’s incubator was Earth, but who’s home is the Planet Fen-Ra.  He then introduces David to Sargon, who will instruct him.  The next four (4) pages are taken up with David’s training.  At every step of the way he surpasses what is expected of him.  He also finds out that Sargon and Valaria were once friends, though she won’t share any more information, other than that Valaria will die a slow death at the hands of Sargon.

The last page of the story shows the costumed black man, who is revealed as, Prince Chaos, and with a name like that is clearly the bad guy of the comic.

There is a eight (8) page back up story also in the comic, it’s entitled; “Rough And Tumble” and features Sargon, Mistress of War, with an appearance by Lugulbanda.  It’s written by John Ostrander and the art is provided by Lenin Delsol (pencils) and Joe Staton (inks).

Please allow me an aside.  My wife and I lived in Chicago for two years, shortly after we were married, and we actually saw the revived Warp, well at least the first episode; “My Battlefield, My Body”.  Warp was a science fiction adventure play in three parts, which meant you had to go to the theater three straight nights.  It originally played in for a full year, 1971, in Chicago, in a very small theater, then moved to Broadway, where it only managed a preview show and eight (8) performances.  It was eventually revived in Chicago and that’s when we saw it.

Here is the Broadway Playbill cover: 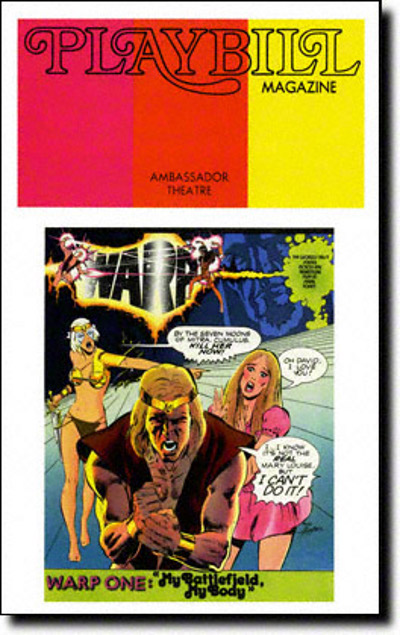 And here’s the poster, Neal did for the Broadway show: 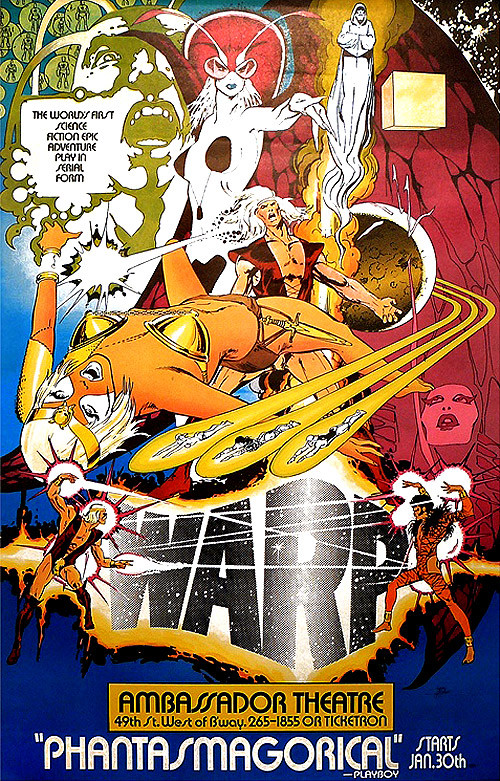 When we saw it, we did not get a full color Playbill, but just a black and white program, which used the same artwork as on the Broadway Playbill,  just not in color.  I asked my wife if she remembered seeing the play and she has no memory of it.  I even showed her the programs and ticket stubs, which I still have (big surprise eh?) but she has no recollection at all.  I don’t remember many details from the play that evening as it’s been over thirty years ago, but I remember attending and generally having a good time seeing it.

Anyway, hope you enjoyed by RETRO REVIEW and bonus look back at the play.  I’ll be back next week with a new Fabulous Find, so be sure to check in.  Til then … be seeing you.