1 out of 5 – Would Recommend: Movie Tie-In Music Videos 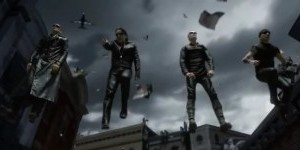 Welcome back to 1 out of 5 – Would Recommend, where the author secretly wishes he was writing for Cracked. To that end, we’re discussing movie tie-in music videos and why they were (sometimes) amazing.

We’re all familiar with it – the breakaway pop hit tied to a movie meant to cross promote record and ticket sales. The music videos for these things tend to be pretty lame, usually just the musician(s) playing the song on an empty soundstage or on one of the movie’s sets interspersed with clips from the movie. However, on some rare occasions – frequently but not always when the musician in question appeared in the film – they went the extra mile and made something that’s by its very nature pretty cheesy but stands up pretty well as a its own thing. Here’s five.

Five Reasons to Love Them

Pictured: A man who inserted a music video shoot into his major studio motion picture.

1) “Girls and Boys” by Prince & The Revolution, Under the Cherry Moon

What makes this video work is that it is literally built on a scene from the movie. At one point in the flick, Prince and Jerome Benton (on loan from Morris Day at…the time) crash a stodgy old rich white people’s party and get it funkin’ by singing and dancing along to “Girls and Boys” as played by a boombox. The video is the scene from the movie extended to cover the full song, with the other ten members of The Revolution crashing the party one after the next and joining in on the fun. It doesn’t stand out as a movie tie-in, and yet it fits perfectly with the movie. 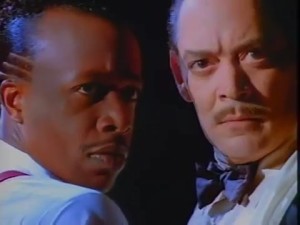 One’s a respectable Hispanic actor. The other is a rapping preacher. Together, they fight crime.

MC Hammer and The Addams Family, what’s a more logical combination? Winner of the Razzie for “Worst Original Song” (which is utter bollocks), the strength of the video is that it is MC Hammer and his posse goofing around with the Addams Family – played by the actual cast of the movie – in their mansion. Hammer gets beheaded, one of his dancers has a dance off with Thing, Gomez (the late, great Raul Julia) challenges Hammer to a duel because King Hammer got a little too friendly with Morticia, Lurch gets down with his bad self, it’s just spectacularly ridiculous.

If they made a full movie of this, it would be my favorite movie ever.

This is a remix of an already pretty good U2 song, and the video is more or less just the band using their inexplicable telekinetic/time manipulation powers around a city while clips from the movie. However, what makes this amazing is that all the movie clips have had guitarist The Edge digitally added in as Lara Croft’s hapless sidekick.

Pictured: Two men who are better than this. One of them more than the other.

4)“City of Crime” by Dan Aykroyd and Tom Hanks, Dragnet

This is Dan “Recorded songs with Ray Charles and Wilson Pickett” Aykroyd and Oscar winner Tom Hanks performing a rap duet. Dan delivers his lyrics like they were a Joe Friday monologue while Tom just kind of…shouts. And they dance. Oh, how they dance. If this doesn’t convince you that the video is a must see, nothing can. 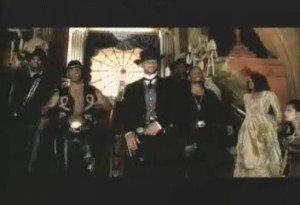 Kevin Kline was apparently not invited…

Will Smith has done a few good movie tie-in raps, but this one makes the list because the video is better than the actual movie. The full six minute version opens with Rita West (Salma Hayek) being kidnapped from her and Jim (Will Smith)’s home by Dr. Loveless, Jim gathering up a posse consisting of the members of Dru Hill, crashing Loveless’s big party and distracting it with a dance number (with the help of Stevie Wonder), and then Jim rescuing Rita from a Gatling-gun wielding Loveless. Much more entertaining than Wild Wild West and much shorter. 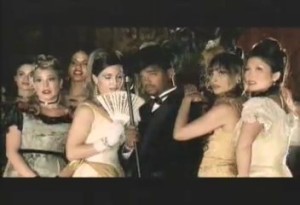 …Though Alfonso “Carlton” Ribeiro was.