Welcome back to Greg Turner’s RETRO REVIEW.  This week I would like to talk about Wham-O Giant Comics  # 1 and only one!  It was published, per the indicia, in April 1967, by Wham-O Manufacturing Company and it was suppose to be the first in a series of giant-sized comics released on a quarterly basis by the company that gave us the Frisbee, Hula-Hoops, the Super Ball, Boomerangs, the Slip’n Slides and the Water Wiggle!  What kid never owned any or all of these terrific products?  I for one, loved the Super Balls!  I had quite a number of these high bouncing balls at one time or another.

Wham-O exclaimed that this was the biggest comic book in the world!  It was not only huge, it was crammed with the greatest variety of exciting reading: Science Adventure, Mystery, Super Heroes, Teen Topics, Jokes, Cartoons, Games and Puzzles!  In fact Wham-O shouted that it contained over 1,500 action panels!  I’ve been looking to add it to my collection for a while now, and last Saturday, at the Back To The Past auction, I was finally able to purchase one! 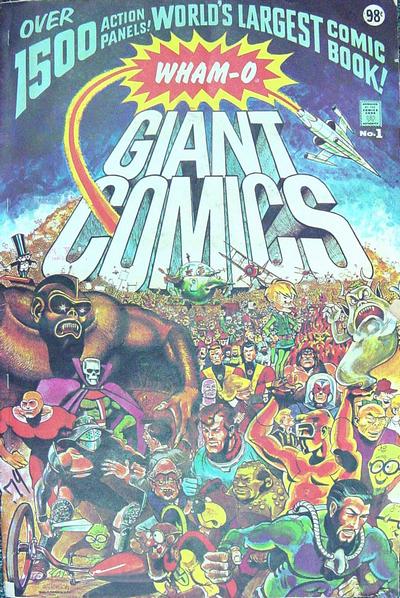 Though it actually has a wrap-around cover, so you really need to see the whole thing to really appreciate it.  The comic itself measures 14 inches by 21inches or open it would be28 inches by 21 inches!  That’s one big comic, I’m telling you!  The cover was credited to W. T. Vinson, and you can tell he put a lot of work into it!  Maybe George Perez picked up some tips from Mr. Vinson on packing in a huge amount of characters in one drawing.  In fact, the thing is so big, I’m not sure where I’m going to store it at!  And all this for 98 cents!  They also advertized a six issue subscription for $4.98.  Though I can’t image the thing getting home delivered in an exceptable condition, if any of you remember receiving a comic subscription back in the 60’s when they were folded in half lengthwise.

Okay enough with it’s size, the comic itself contained about twenty-four (24), yes, you read correctly, twenty-four (24) individual comic strips/stories by many different artist, most of whom I’ve never heard of (these stories ranged from half a page to three pages).  There were a couple of exceptions to this and those are the stories I would like to expound upon in this review.

First up is the first strip in the comic, Radian by Wally Wood.  It’s a three page strip that introduces us to the hero Radian and provides his origin.  He was a low-grade technician at an atomic power plant and he was exposed to a radiation leak.  All the other workers exposed died, but Gilman Graves lived and developed super powers.  His atoms were now denser, almost like his body was made of metal.  He then takes on the mantel of Radian, The Atomic Hercules.  In this story he battles the evil Steel Skull and ultimately overcomes the villain, but as far as I know, Radian, or the Steel Skull, for that matter, are never to be seen again!

The second story featured, Tor and the Man From Aeons and was drawn by Lou Fine before his unfortunate death.  This Tor, though a caveman, is not the same caveman Tor that Joe Kubert published.  Wow, how could there be two separate cavemen named Tor in comics?  Both are not very well know, but Kubert’s Tor is likely the most familiar to my readers.  Fine’s Tor was a stone ornament that when bombarded by a gamma-ray gun grew and “became alive”.  He then did the bidding of young boy named Sandy.

There is a two page story written and drawn by Ernie Colon, later in life known as Ernie Chan!  His story is entitled; “Kaleidoscope of Fear” and stars a young boy named Jason Jones and involves Time Travel.

The last story I want to mention is another Wally Wood two pager.  This one introduces the reader to Goody Bumpkin a character he went on to ultilize elsewhere, as well.  As Wood writes, “the story takes place somewhere in time and space, between nowhere and the unknown, neither here nor there, and none the worse for it”.  It’s a place called Euphoria!  In this initial story, Goody faces off against the evil wizard, Rufus Rottenbad!  And so I don’t leave you in suspense, everything works out just fine for Goody and his merry band!

I’ve enjoyed reading through this one of a kind comic book collector’s item and there are a couple of other good stories that I haven’t mentioned here, due to space, but there are also some pages that would have been better being left out, but with that said, I’ll still give it two (2) out of three (3) Legion Flight Rings!  Don’t mortgage your house to buy this comic, but it’s well worth your time and a reasonable amount of money to own this true one of a kind collector’s item!