I am going to go way back, even before I started reading comics for this week’s Retro Review.  In fact we need to go back to right before I was born, for D C Comics’ Worlds’s Finest Comics # 71.  It’s cover dated July – Aug 1954. 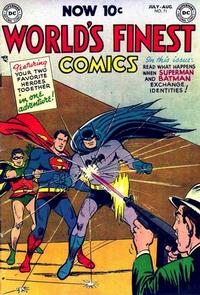 And why this comic you ask?  Well, it’s because it’s the first time that Batman and Superman appear together in World’s Finest Comics!  Sure, for years they had both been featured on the covers, but inside the comics they appeared in separate stories!  But before I review this comic, in the effort to be completely honest, this isn’t the actual first comic that Batman and Superman appeared in the same story, that comic was published two years earlier, in Superman # 76, cover dated July – August 1952. 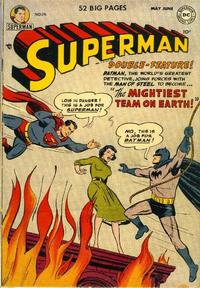 But I wanted to talk about World’s Finest, not Superman, so back to World’s Finest # 71.  The story is entitled; “Batman – Double For Superman”.  The story was written by Alvin Schwartz and pencilled by Curt Swan and inked by Stan Kaye.  The story, somewhat like the story two years earlier, feature the heroes trying to accomplish a mission, this time recovering some green kryptonite, while trying to keep Lois Lane from discovering Superman’s secret identity!

The story opens with some crooks recovering a kryptonite meteor from the sea in a stolen helicopter.  Batman and Robin  are trying to find thieves and are shot out of the sky.  Superman happens to spot them and rushes to save them, but when he changes from Clark Kent to Superman, Lois Lane sees him.  The heroes decide to team-up, and they come up with a plan for Batman to assume Superman’s identity, and let Lois see him changing, thus confusing Lois, maybe, that is.

Anyway, while Batman is ‘confusing’ Lois, Superman, now wearing Batman’s costume finds the stolen copter and breaks into the crooks’ hideout.  But only to be overcome by the krytonite!  Robin helps Batman fake Superman’s powers to fool Lois!  But Lois isn’t fooled at first, but when Bruce Wayne knocks out a couple of escaped lions and then when his hair can’t be cut by Lois’ scissors, she starts to waver.

She still thinks something is amiss and follows ‘Superman’ (actually Batman) to where the crooks are in hiding and while Batman (as Superman) confronts the crooks, Lois sneaks in and finds Clark knocked out, wearing Batman’s costume.  He is soon carried away from the kryptonite and the heores switch back to their own costumes.  Superman flies Lois back to the Daily Planet, where they both find Bruce Wayne!

Pretty typical of stories of the 1950’s, as well as, the 1960’s actually, with Batman and Superman switching costumes and or identities to help protect each other’s secret identities.  But this story and comic book started a long run of Batman and Superman team-ups within World’s Finest Comics.  D C sold a lot of comics “back in the day”, so they must have been doing something right!  I give it three (3) out of five (5) Legion Flight Rings for that reason alone!