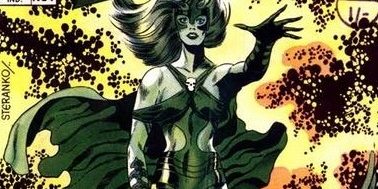 It’s time for another RETRO REVIEW, so settle back and let’s turn the time machine back to 1968!  This week I’ve unearthed from my collection X-Men numbers 49 through 51 from Marvel Comics.  These three books are cover dated, October through December 1968, meaning that they would have been on the comic racks during the summer of 1968, right when kids were likely to be buying the most comics.  All three feature wonderful covers drawn by the great,  Jim Steranko!

This issue features a beautifully drawn cover, as I said, by Jim Steranko.  I shows the five X-Men racing forward on what appears to be a giant head, with skulls for eyeballs!  Awesome!  I mean, with a cover like that, how could you not want to buy that comic?  I certainly was in, in a red hot minute!  Take a look: 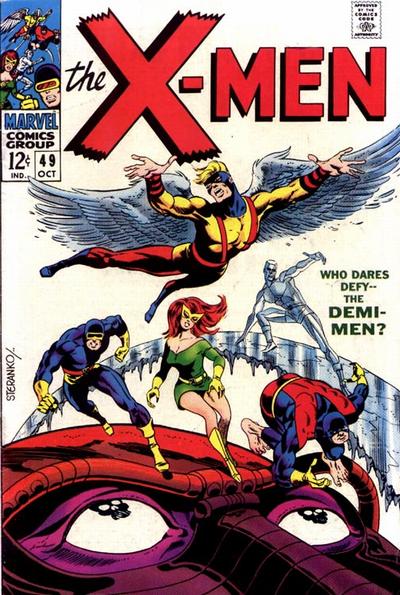 Unfortunately, the interior artwork was not by Steranko!  No, once you open the comic you find that that Don Heck provided the breakdowns, Werner Roth was responsible for the finished pencils and John Tartaglione did the inks.  Not to say these gentlemen didn’t do a fine job, but after the totally awesome cover, the interior artwork was a let down!  Oh, by the way, the story was written by Arnold Drake.

The story begins with Warren Worthington the third (The high-flying Angel) returning to their mansion home, where they lived under the tutelage of Professor X, until he met his demise.  Once their he hears Cerebro’s alarm sounding (their mutant detecting machine) he mentally contacts Jean Grey (Marvel Girl).  She then uses her powers to alert the other X-Men.

Drake then shifts the scene to a strange mansion in San Francisco.  I guess there must have been a lot of mansions back in 1968!  Inside this mansion, we find the mutant villain, Mesmero, who is leading a band of henchmen in the name of Magneto!  He is using some kind of machine to awake latent mutants across the globe.  The machine calls these “new” mutants to come to San Francisco and join his cause.

It’s at this moment that the scene shifts to a street in San Francisco where Bobby Drake (Iceman) saves a woman from being hit by a truck.  She seems dazed and confused, so Bobby takes her back to his and Hank McCoy’s (the Beast) apartment.  Meanwhile Angel, Marvel Girl and Cyclops (Scott Summers) have flown in a borrowed Avengers quinjet to join Bobby and Hank in California.

Four of the five  X-Men leave to see if they can find out what’s going on, and of course, they run into Mesmero’s henchmen who are out gathering up the latent mutants.  Battle ensues  and the Angel is injured, so the remaining X-Men let the henchmen escape to tend to Warren!

It’s at this time the the mysterious girl, after taking a shower, comes out into the apartment, revealing that she has natural green hair.  She introduces herself to Hank, as Lorna Dane.  The X-Men return and leave again, leaving Iceman with Lorna this time.  And as the story closes, Mesmero and his henchmen bust in on Iceman and Lorna.  He quickly mesmerizes them and the henchmen bow down before Lorna!

Issue fifty has one of the all time greatest covers ever to appear on a Marvel comic book, at least in my opinion!  It features a costumed Lorna Dane in a primarily green hued cover.  It is absolutely gorgeous!  See if you agree: 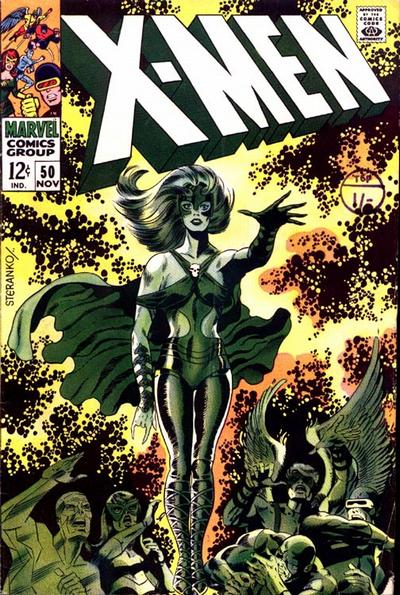 This issue is again written by Arnold Drake, but this time not only the cover but the interior pencils are done by Jim Steranko, with inks by Tartaglione!  The story opens with Mesmero returning to his mansion headquarters with the captured Lorna.  He uses his mutant stimulating machine directly on Lorna and she is transformed, bringing out her latent mutant powers!

Meanwhile, the X-Men have tracked Mesmero to his headquarters and attack.  Steranko treats the readers to four wonderfully drawn pages of the X-Men battling Mesmero’s henchmen before they are overcome by gas.  They awaken to find a costumed Lorna Dane, who Mesmero proclaims is the daughter of their enemy, Magneto!  And she says she understands that she is their Queen!

The X-Men bust loose, and begin to battle Mesmero and his troops.  It is at this moment that Lorna uses her magnetic powers for the very first time!  But rather than using them against the X-Men, she strikes out against Mesmero’s men.  The half page panel at the bottom if page thirteen is awesome, and it is followed by a full page spread, as you turn the page, with the X-Men charging the now alone Mesmero!

But before they can engage him, they are thrown back, by a ripped up section of metal floor and a hidden figure steps from the shadows, revealing himself to be the presumed dead, Magneto!  Wow, quite the reveal and cliffhanger of an ending!  I certainly know I wanted to find out what was going to happen, so I made sure I picked up the next issue, as well.

Again, this issue sports a nice Steranko cover featuring the X-Men, in the foreground, in front of a giant Viking-like figure, with flames springing up around them!  And since I’m that kind of a guy, here it is for your perusal: 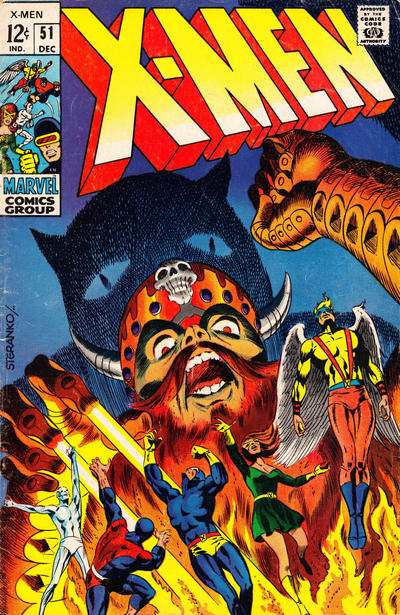 Issue fifty-one has a nice symbolic frontispiece proclaiming the title of the story; “The Devil Had A Daughter!”  And is again brought to you by Arnold Drake, Jim Steranko and John Tartaglione.  Magneto quickly calls on Lorna to choose, either to stand by “these fools” (the X-Men) or to “heed the call of her own blood ” and to join him!  Bobby “Iceman” Drake tries to point out Magneto’s evil ways and after a page of discussion, Cyclops strikes down Magneto, inciting a knock-down donnybrook!  Six glorious pages of Steranko drawing the X-Men battling Magneto follows.  Ultimately, Scott “Cyclops” Summers brings the house down around them all, using his powerful optic blasts, enabling the X-Men to escape, though they must leave Lorna in Magneto’s clutches!

The story ends with Bobby berating Scott for abandoning Lorna, but Scott says he has a plan, but we are not to learn of his plan this issue, as writer, Drake, changes the scene one final time to reveal the coming of a new menace, Erik The Red!  The character shown on the front cover has made his entrance from beneath the Earth itself on in the very last panel of this story!

Thus ends this three parter, which featured the introduction of a new mutant, Lorna Dane, later to adopt the codename; Polaris, as well as, the return of the X-Men’s arch-enemy; Magneto, and also a new antagonist, in the aforementioned; Erik The Red!  Arnold Drake may not have been the best writer in the storied X-Men franchise, but he certainly left his mark over these three issues!

And two of the three issues are drawn by Jim Steranko, so they are well worth collecting for that fact alone!  It was with these issues that things started to get better for the X-Men.  An interesting storyline, new and old characters, and much better art.  I highly recommend that you add them to your collection, including issue number forty-nine, if not for just the cover by Steranko alone!

Stay warm, my friends and come back next week for another Fabulous Find!  Be seeing you …