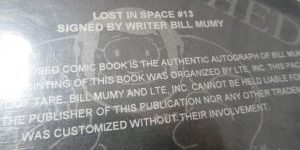 Welcome back to Hammer Drops, where we once more turn our eyes to a recent auction session to find a moral to its story. This week we’re looking at some lots from our September 19th Celebrity Autographs & Collectible Comic Books session, specifically what they say about the importance (or lack thereof) of a Certificate of Authenticity.

We’ll be contrasting two lots for this column, Lots 20 & 211. They are a signed copy of Anthony Bourdain’s book Medium Rare without CoA (lot 20) and a signed photo of Motor City Madman Ted Nugent with CoA (lot 211).

Bourdain’s autograph sold for $60 while Nugent’s sold for $10. There are a lot of possible reasons for this happening: Bourdain died two years ago while Nugent is still alive & signing stuff, Nugent has worked very hard to appeal to a more limited but politically aware audience in the last decade while Bourdain maintained a broader appeal until his death, Bourdain’s book is probably a pretty good read while Nugent’s photo is somewhat troubling for some folks, etc. That said, we’re using them to look at the difference between CoA and Provenance when establishing value.

For the record, the Ted Nugent signature is certified by James Spencer Authentication and they are one of the single most reputable authenticators in the industry. We’re in NO WAY casting aspersions on them, just making a larger point. Heck, Scott points out that their presence on even one item in the collection helped establish the bona fides of the rest of it!

Even so, autographs in this collection come with pretty darn good provenance, or known history, that suggests authenticity. We had a large collection accumulated by one person, a journalist, who kept records (like event programs, event press kits, and clippings of his work) of where and when the signatures were collected with most of the signatures. That would be quite a bit of effort to go through to fake a bunch of signatures in a personal collection, so even though most of them lacked a Certificate of Authenticity there was no reason to doubt that they were genuine.

Contrast that with some of the Certificates of Authenticity from our Giant Size Wednesday session on September 17th, where some of the signatures were certified by Limited Treasured Editions, Inc. As far as we can tell, this company no longer exists. If they do, their web presence seems to be entirely made up of the comics they certified, which tells us nothing about who they are/were or what their methodology is/was.

Which isn’t to say that we doubt their authenticity, it’s just a reminder from Scott and I that not all Certificates of Authenticity are on JSA’s level. Ultimately, any yahoo can print up a little sheet of paper attesting to an item’s authenticity but that doesn’t mean they’re actually experts or did any work to confirm their findings. It certainly doesn’t mean they’re still around to stand by their ruling, either.

If you’ve got only one autograph in your collection, even a CoA from an unknown third party will help shore up the value – it’s trivially easy to fake a signature. But if you’re accumulating a collection, then a solid provenance will help immensely when you can’t get an autograph certified – so be sure to hold on to those convention programs and/or get a picture! And when you’re ready to part with it, make sure you get in touch with the experts here at Back to the Past to ensure that you get the best value for your collection!

And until then, we’ll see you back here in two weeks for more Hammer Drops.