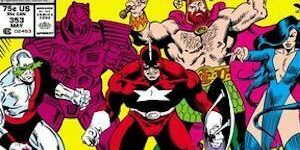 Marvel’s universe was born during the Cold War era, and the tensions that permeated that era gave rise to a lot of Marvel characters – most of them antagonist to the company’s predominantly American heroes. For today’s installment of My Hero, we’re looking to the very end of the Cold War to discuss one such character: Vostok AKA Sputnik of the Supreme Soviets, People’s Protectorate, and Winter Guard. He is, naturally, part of our Custom Action Figure collection.

1988’s Captain America #352-353 introduced a new team of Russian superheroes, taking over the role of the USSR’s official superteam from the mutants of the Soviet Super Soldiers. The new team, The Supreme Soviets (the equivalent of naming a U.S. team “The Congressmen”) were a much more one-to-one equivalent of the American Avengers, with their equivalent to The Vision bearing the name “Sputnik”.

The team, now renamed ‘The People’s Protectorate”, next appeared in the pages of 1990’s Avengers #319 – 324, battling nuclear terrorists alongside The Avengers and Canada’s Alpha Flight. It is here that Sputnik was renamed Vostok, and his abilities to control and merge with technology are shown in full for the first time.

Two years later, Fabian Nicieza (the writer of the aforementioned Avengers story) would pick up the character again in the pages of Soviet Super Soldiers #1. This one-shot issue was mostly dedicated to explaining the new roles of Marvel’s various superpowered Russian agents, heroic and otherwise, in the newly Post-Soviet world but took a few pages to exposit on the origins of Vostok. Not exactly a robot, he is actually a Soviet scientist whose encounter with unidentified alien technology transformed him into a purely artificial being. His original name, Sputnik, was chosen to highlight his purely artificial body with a tribute to the first unmanned Soviet space mission. He renamed himself Vostok as a way of reclaiming some of his lost humanity, being named for Russia’s first manned space mission.

And so it goes to this very day! Russia’s Avengers-equivalent was renamed the Winter Guard in 1998’s Iron Man #9, with Vostok remaining a member of a team that was now unambiguously allied with Earth’s Mightiest Heroes.  The renewed tensions of the Putin era in Russia has brought the team back to antagonism, appearing sporadically in the pages of Jason Aaron’s Avengers as one of several teams seeking to unseat the team as Earth’s Mightiest Heroes. Vostok remains a quiet mainstay of the team, although he’s been considerably redesigned.

He may not be one of Marvel’s best known heroes, but he’s My Hero this week and a worthy inclusion in our Custom Action Figure Collection.