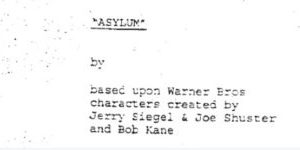 Welcome back to Scripting Errors, where we look at movies that might have been! In honor of Justice League’s impending release, we’re looking back to the earliest attempt to really bring DC’s icons together on the big screen – Batman vs. Superman: Asylum!

The story was initially written by Andrew Kevin Walker (no relation), whose most notable works include Se7en, 88MM, and Sleepy Hollow. The draft available online, however, has been reworked by veteran screenwriter Akiva Goldsman (who would have been hot off of writing Cinderella Man at the time, though he did write two Batman features in the 90s) to make it less bleak. It’s dated June 2002, a time when Warner Bros. was trying desperately to get its act together with DC flicks to compete with Marvel’s burgeoning film slate – a state of affairs that arguably continued until June 2017. 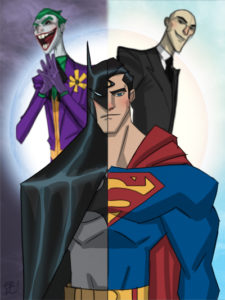 Our heroes are getting old – Batman’s been retired for five years (with Robin, Alfred, Commissioner Gordon, and the Joker all dead) and Superman’s marriage to Lois Lane has fallen apart. That said, Superman’s still out there fighting the good fight and Bruce has just gotten married to the girl of his dreams…who promptly gets murdered on their honeymoon. Worse, she’s been killed by a terrorist that Superman rescued from an angry mob – she’d be alive if it weren’t for Clark. Batman comes out retirement with vengeance on his mind and it will be up to his best friend to keep him from going over the edge.

This script predates the current “shared universe” craze, and presents a pretty solid world where Batman & Superman are the only superheroes around. It would have brought their pre-crisis partnership to life, albeit with them disagreeing rather violently for most of the story, in a way that DC’s current offerings haven’t achieved. In all, it would have been a worthy addition to the superhero landscape of its day – but I’m shedding no tears for its loss.

Come back next week for a brand new Tokusatsu Gesundheit!