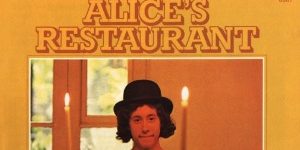 Welcome once again to a new edition of Fabulous Finds!  This week I am again doing something a little different.  I’ll be writing about one of my Thanksgiving traditions involving music.  Any of you that know me well, know that I’m not just a guy interested in comic books and fanzines, but I love old paperback books from the fifties, sixties and seventies, and also music, lots and lots of music!  I still have most of my original vinyl collection, both albums and singles (45s) from my youth, plus way to many cds to ever try to count.  As most of you might guess my music collection centers on the sixties and seventies, but I have many earlier, as well as, later albums, as well.

So today I want to talk about an album I put on my turntable on Thanksgiving morning, as my wife readies the Thanksgiving turkey and all those wonderful fixings that go into a Thanksgiving family dinner.  okay, so what is that album?  Well, that would be Alice’s Restaurant by Arlo Guthrie!  It was issued by Reprise Records in 1967.  Here is the cover to the album: 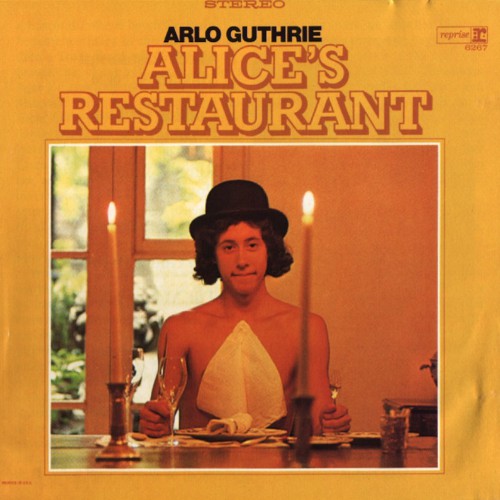 This is a wonderful album and if you have not heard it, then I would suggest you search it out and add it to your record, or at least your cd or mp3 collections.  Hopefully, down at the bottom of the post I’ll have a link to the YouTube video of the song for your listening pleasure.  But, please don’t just jump down there yet, without reading what I have to say, but it you just can’t wait, then go ahead and listen then come back right here.  We’ll all wait!

I listen to the complete record, usually multiple times, each Thanksgiving and have been doing so for so many years, I really can’t remember when I didn’t listen to it.  But since the record came out in 1967, I guess that I’ve been listening to it for  fifty (50) years now.  Yikes, I’m showing my age!

So why do I listen to it, and especially on Thanksgiving Day, well, the first side of the record is one long song, over eighteen (18) minutes, to be exact and that song was written and sung by Arlo, the son of legendary songwriter and folksinger, Woody Guthrie, about a Thanksgiving Day he experienced in 1965.

Side One of the record is a song, as well as, a story about his ill-fated trip back to Stockbridge, Massachusetts, where he had gone to school, to visit friends for Thanksgiving.

I’d write more, but you really ought to experience it through the song.  So really, give it a listen if you are not familiar with it.  Those of you already familiar know what I’m talking about.  And I guarantee that by the end of the song you’ll be singing along … “You can get anything you want at Alice’s Restaurant”!

Two years later, in 1969, United Artists released the Original Motion Picture Score (or Soundtrack) album.  For reasons, I don’t understand, they chose to break the song, Alice’s Restaurant Massacree into two separate parts and put Part one on Side One and Part two on Side two.  I don’t think this is nearly as effective, but I guess they were trying to get good material for both sides of their Soundtrack album.  I recommend the original 1967 album, but here is the cover to that Soundtrack album, so you can compare: 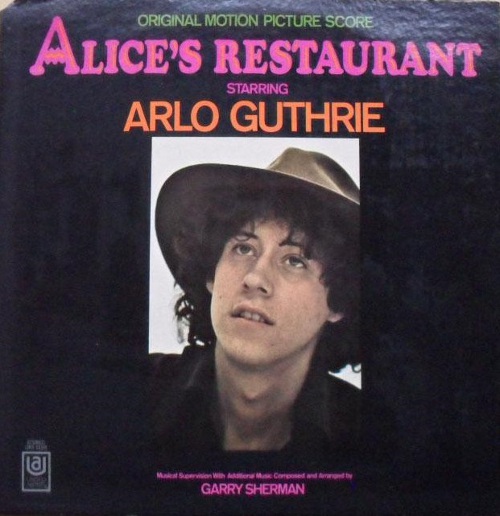 And because the album is such a classic, Arlo decided to rerecord the whole album and release it again in 1996.  He even redid a recreation of the iconic cover photograph of himself, almost thirty years later after the initial album cover.  This newly recorded version was released by Rising Sons Records.  And here is that cover: 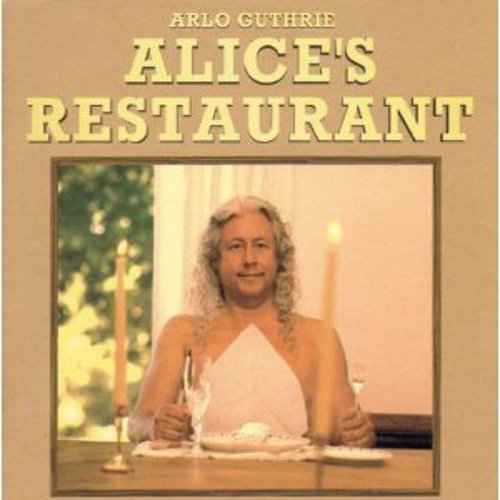 Each song on this rerecording is essentially faithful to the original, with one exception.  At the end of the song; Alice’s Restaurant, Arlo launches into a story where he relates going to the Presidential inauguration in 1976, and meeting Jimmy Carter‘s son, Chip Carter, who told Arlo of the discovery of an opened copy of Alice’s Restaurant left behind by the Nixons when they left the White House, leading to speculation around the fact that the title song and the gap in the Watergate tapes are both 18½ minutes in length.

So there are three different versions of Alice’s Restaurant Massacree out there for you to discover.  How deep you want to go into it, I’ll leave to you, but definitely pick up the original via your favorite media.  Convenience is wonderful, but in my book, nothing beats vinyl.

Thanks for stopping by and Happy Thanksgiving to you all.  I’ll be back again next Friday with a new RETRO REVIEW and back again in two weeks with another Fabulous Find.  be seeing you …

And here is the actual song, in all it’s glory: