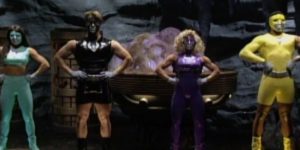 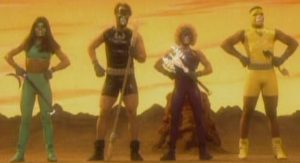 Emperor Gorganus and his cadre of evil space aliens have set their eyes on capturing the Earth, a natural nexus of wormholes called Power Portals. Nimbar, the gelatinous protector of the portals, selects four California teens to become a new team of Galactic Sentinels, gigantic superhuman warriors empowered by a tattoo-like mark on their arm. Thus, the four teenagers become the Tattooed Teenage Alien Fighters from Beverly Hills!

Nimbar, the answer to the question “What happens when Zordon sneezes?”

The unexpectedly massive success of Power Rangers in the early nineties spawned several imitators – oddly enough, most of them from the same production company as Power Rangers itself. Only two of these imitators were created out of whole cloth and the first of those was Tattooed Teenage Alien Fighters from Beverly Hills, debuting just over a year after MMPR.

Who buys action figures near me?

The series looks seriously low budget, enhancing its corniness over and above that of Power Rangers: the sets for the monster fights are sparse, the heroes and villains most shoot post-production energy beams at each other rather than physically battle, and the monster suits are below the level of your average Youmacon cosplayers. That said, the show has a certain amount of charm and is ultimately comparable to  Goranger or an original series Kamen Rider. 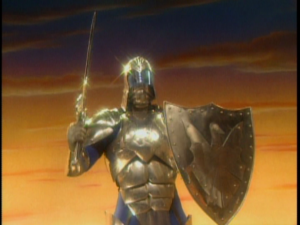 I don’t even pretend to understand the physics of how four teenagers combine into a robot knight.

*Superhuman Samurai Syber-Squad had Tim freaking Curry as the voice of its villain, hence “most”.

Come Back Next Week for a New Installment of 1 out of 5 – Would Reccommend!