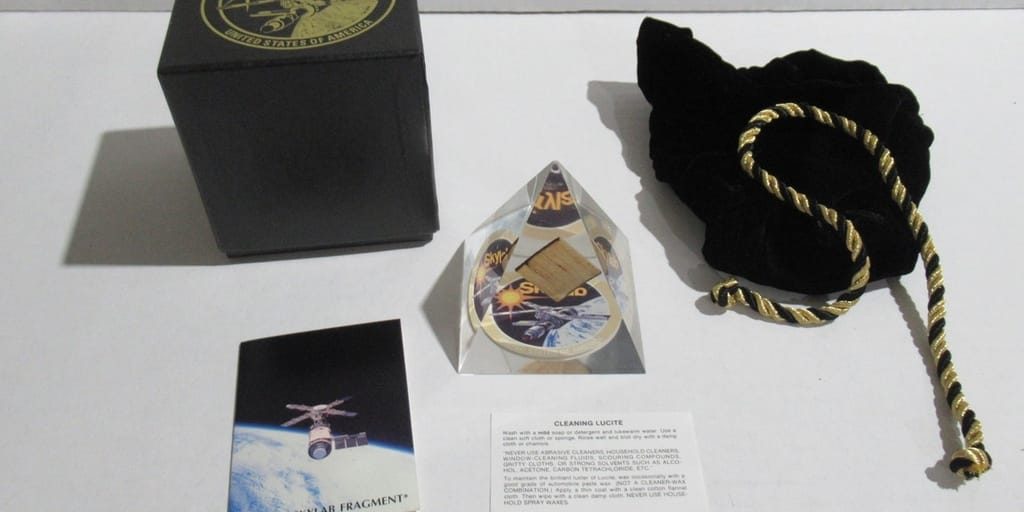 Welcome back to Consigned, Cool, & Collected! Every Monday, we here at Back to the Past pause a moment to go gaga over the cool stuff we’re handling every single day. Today’s specimen sold at auction over the weekend, but the collection it came from is far from through. It’s an authentic piece of Skylab, the United States’ first operational space station, preserved in Lucite.

Salyut 1: Revenge of the Soviets 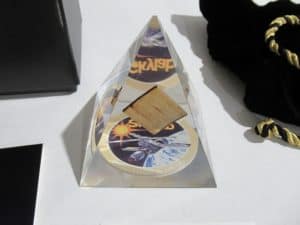 While the United States considers itself the “winner” of the Space Race thanks to the moon landing, the reality is that the USSR beat us to the punch on most other major achievements. This includes space stations. The Soviet station Salyut 1 was launched into space on April 19, 1971. In those days, space stations were built as one monolithic structure and launched into space as-is. The modular design of modern space stations just wasn’t feasible in the days before space shuttles and similar large, reusable spacecraft.

Unfortunately, the Salyut 1 was less than successful. The first crew attempted to man the station just three days after it went up. The cosmonauts of the Soyuz 10 mission failed to dock and were forced to return home. They proved better off than the crew of Soyuz 11, which followed on June 6, 1971. They docked successfully and spent 23 days performing scientific experiments on the Salyut station. An electrical fire cut their mission short, and a valve failure on their space capsule claimed the life of the three-man crew before they returned to Earth. Salyut 1 burned up re-entering Earth’s atmosphere on October 11, 1971. It had not been occupied since the Soyuz 11 crew left, as modifications needed to be made to the program to ensure cosmonaut safety. 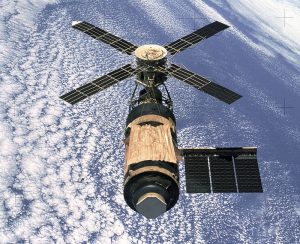 Final photo of Skylab, taken by its final crew as they left.

The United States launched its first space station on May 14, 1973. Named Skylab, it was successfully crewed on ,May 25, 1973 by the astronauts of the Skylab 2 mission. They were ferried up by an Apollo series capsule – the same kind that was being used to bring astronauts to the moon. They crewed the station for a then-record 26 days, and successfully returned to Earth on June 22, 1973. Skylab immediately became the world’s most successful space station mission, with its first crew docking and returning safely.

This was followed by the equally successful Skylab 3 mission, which spent sixty days in orbit. Skylab was outfitted with amenities including waste disposal and outer space’s first shower stall to facilitate such long stays. Even so, there was still downtime. The crew of the Skylab 3 mission prepared a little surprise for their successors: trash bag dummies, complete with flightsuits, manning the station’s controls. 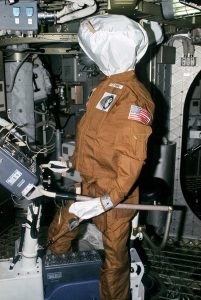 The dummies that greeted the crew of Skylab 4.

Skylab 4, the third and final manned mission in the Skylab program, arrived on November 16, 1973. Their predecessors little prank had sat undisturbed for nearly two months and was probably a little disconcerting to discover. Mission pilot William Pogue suffered from space sickness in the early days of the mission. The crew, fearing it might cut their mission short, attempted to hide it from mission control. It is hard to hide things when you’re being monitored 24/7 and they were reprimanded by mission control commander Alan Shepard. Its not every day that your nausea gets you chewed out by the second human being to ever fly in space and the third to walk on the moon.

Unlike previous missions, all three members of the Skylab 4 crew were rookies. Meaning that they had never actually been to space prior to this mission. It got off to a rocky start, but they ultimately stayed up there for eighty days. That’s small potatoes compared to the hundreds of days astronauts will spend aboard space stations now, but such a feat had never been accomplished before. In all, 16.8 of the 24 months worth of life support supplies were used by the program’s end. 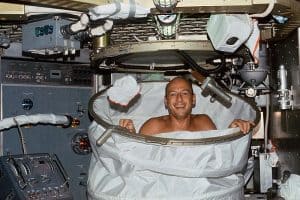 Skylab’s shower. Curtain secures to the ring at the top. Honestly, we’ve USED less comfy looking stalls than this.

Skylab would remain uncrewed after Skylab 4 returned to Earth on Feburary 8, 1974. There were hopes that it could be used in conjunction with the newest breakthrough in spacecraft technology, the space shuttle, but that didn’t prove ready for full use until 1981. Skylab spent a total of 2249 days in orbit, with just under 8% of it being spent occupied. A decaying orbit brought it back into Earth’s atmosphere on July 11, 1979.

Skylab’s return to Earth was a bit of a media sensation. Savvy clothiers offered t-shirts and baseball caps emblazoned with bullseyes to celebrate the event. American newspapers offered bounties on (verifiable) pieces of Skylab. NASA calcuated that debris had a 1 in 152 of debris striking a human being and a 1 in 7 chance that it would hit a city with a population of 100k or higher. Frankly, those are terrifying odds – nobody wants to go out being struck by a falling space toilet.

Luckily, the station ultimately came down in a largely unoccupied part of Australia (truthfully, that’s most of Australia). There were no reported injuries or major property damage. Locals got a nifty light show, some cool souvenirs (as long as they kept their mouth shut about it), and international attention. NASA got a lighthearted fine for littering ($400 Australian, which works out to $544.50 America). Really, best case outcome all around.

Encapsulation as a Paperweight

That station broke up just ten miles above the Earth’s surface, much lower than expected. This meant there was a lot of surviving debris, more than enough to be busted up into nifty souvenirs like this Lucite paperweight. It has traveled 890,000,000 miles and change to end up holding down papers on some lucky bidder’s shelf.

If you have a historical collection that features artifacts like this and you’re ready to pass it on to other collectors, we’re here to help. And if you just want to keep hearing about cool stuff, we’ll be right here for you every Monday morning.