Who is the Batman of Zur-En-Arrh? 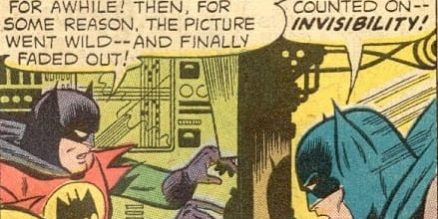 Welcome back to My Hero, wherein we here at Back to the Past tell you why the obscure characters from our custom action figure collection are great! Years ago, we purchased the life’s work of an artist and comic fan whose chosen medium was granting forgotten comic characters the action figure immortality denied to them by major toymakers. We’re still sorting through it all, and we’re making new finds every week! In honor of the great year DC Comics fans are slated to have (we’ve got The Flash, The Batman, Black Adam, Aquaman and the Lost Kingdom, League of Super Pets, and Batgirl on the horizon..and that’s just the major motion pictures), we’re kicking the year off with an obscure DC hero: The Batman of Zur-En-Arrh! 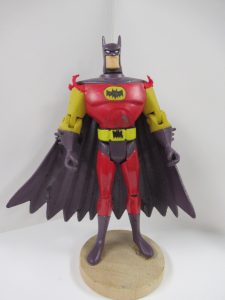 Batman of Zur-En-Arrh as he appears in our collection.

The cover of 1958’s Batman #113 promised “The Batman-Superman of Planet X” and it definitely delivered! Bruce Wayne awakes in the middle of the night, following some strange imperative, flies off in the Batplane without Robin. He is shortly abducted to the distant world of Zur-En-Arrh, where he’s confronted by a gaudily dressed doppelganger. This is Tlano, a scientist and Zur-En-Arrh’s resident Dark Knight. It seems Tlano has been observing Bruce from a distance and modeling his life on that of Batman. He has more technologically advanced versions of the Batmobile and Batplane and his greatest weapon is the Bat Radia – a little box that can manipulate matter remotely. It’s how he abducted Bruce.

He’s brought his idol to Zur-En-Arrh for help. It seems that a mighty alien race is preparing to invade, and turning them back alone is beyond Tlano’s abilities. Batman is flummoxed as to why he was chosen over his friend Superman, who is much better at the whole alien invasion thing. Tlano explains that the environmental conditions of Zur-En-Arrh affect people from Earth like the conditions on Earth affect Kryptonians.

The pair team up and successfully repel the invaders, with Bruce greatly enjoying being a Man of Steel. Once the world is saved, Tlano teleports Bruce home and lets him keep the Bat Radia as a souvenir. It won’t work on Earth, but it is undeniable proof that the trip actually happened. Earth’s Batman awakens in his Batplane, with only moments having passed since he left. 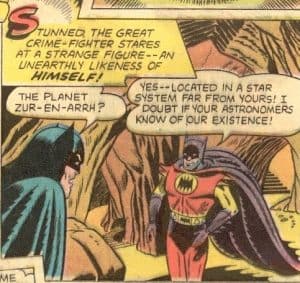 Tlano appears in a costume that makes Robin’s look restrained.

Zurr-En-Arrh in the 21st Century

As goofy Silver Age stories go, Batman’s time on Zur-En-Arrh was relatively well remembered but never really relevant. Tlano and his homeworld never appeared again Pre-Crisis. This was exactly the kind of silly story that the Crisis on Infinite Earths was designed to wipe from continuity. So naturally, it came back as part of Grant Morrison’s Batman run in the 00s.

2008’s Batman R.I.P. saw Bruce Wayne’s mind shatter under the assault of The Black Glove. He retreated to a hypnotically implanted back-up personality, The Batman of Zur-En-Arrh, and constructed a gaudy costume to properly battle The Black Glove. Even experiencing a dangerous psychotic episode, Bruce Wayne was still not someone to be messed with, and he fought his way to his foes with nought but a thrift shop costume and a baseball bat.

A straighter take on the story came from the cartoon series Batman: The Brave and The Bold. The season two episode “The Super-Batman of Planet X!” was an adaptation and expansion of Batman #113. Tlano becomes a mild mannered reporter who has adopted a superheroic identity based on Zur-En-Arrh’s own creature coincidentally named a “bat”. Tlano and Bruce, called Super-Bat on Zur-En-Arrh, team up as they figure out how to send Bruce home. 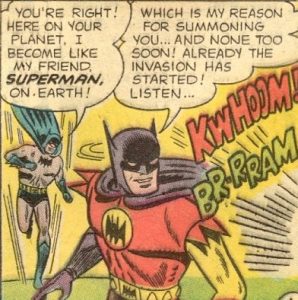 Those two modern appearances have put the Batman of Zur-En-Arrh into the standard rotation of Batman costumes. He has shown up as collector action figures, Funko Pop! figures, LEGO mini-figs, and even video game DLC. Most of these have been the baseball bat wielding Grant Morrison version, but the costume is functionally the same. This custom action figure is made from a Mattel Justice League figure, capturing the character in perhaps the best known style that he was never officially produced in.