Spider-Man:Rock Reflections of a Superhero 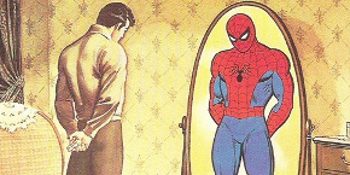 Hey ho, everyone.  This week I’ve gone to my vinyl record racks for my Fabulous Find.  And I’ve pulled out a gem!  It’s the record album entitled; Spider-Man: Rock Reflections of a Superhero from Lifesong Records. It came out in 1975, and in obvious conjunction with Marvel Comics.  I quickly purchased it at the local Korvettes!  Anyone remember that department store?  I never cared much for the rest of the store but they had a great record department! 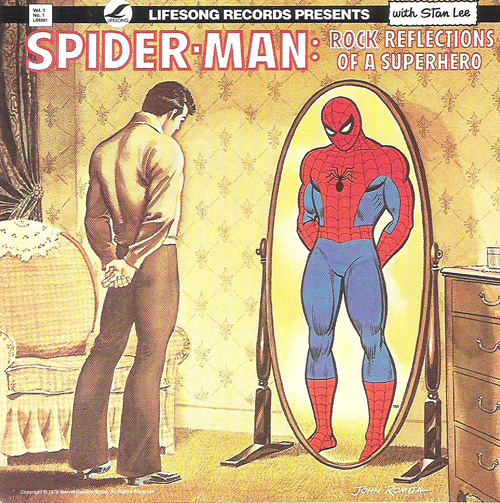 Spider-Man: Rock Reflections of a Superhero LP from 1975

As you can see from the cover above, it’s got a great painted cover by John Romita, senior, not junior!  It features Peter Parker looking into a mirror and Spider-Man being reflected back.  Pretty nifty and very well done, at least in my opinion!

The back cover of the album is pretty great too, take a look: 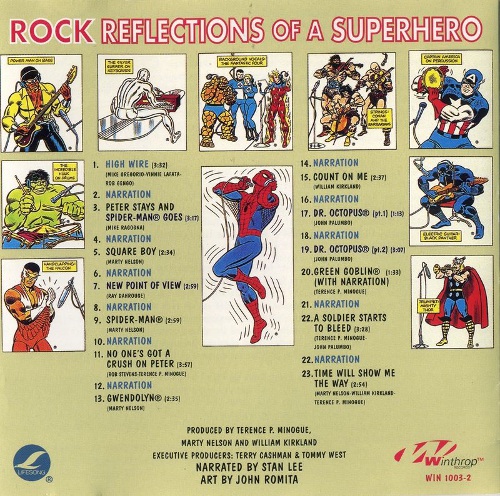 Again, as you can see, it features Spider-Man, himself, singing and dancing in the center.  And around him is his backing band.  The captions may be too small to read so let me help you out.  There’s Luke Cage, Power Man on Bass, the Silver Surfer on Keyboards, the Fantastic Four providing back-up vocals, Conan and the Barbarians on Strings, Captain America on Percussion, the Incredible Hulk on Drums, T’Challa, the Black Panther on Electric Guitar, the Flacon providing Handclaps and the Mighty Thor on Trumpet!  Now that’s a band!

The record will never be considered a great rock album and I must admit to not liking it very much when I bought it back in 1975, but listening to it now, it really isn’t that bad, and actually holds up pretty well.  The narration is pure Stan Lee and some people would say that the record was worth it, just for Stan’s part!

The songs themselves are interesting and they writers have captured the Marvel/Spider-Man tone very well.  I’ll link to a YouTube video of the first song off the album, so that you can get a sense of the lp:

So what do you think?

And before I wrap things up for this week, let me leave you with the ad that ran in Marvel Comics back in the day selling this very record: 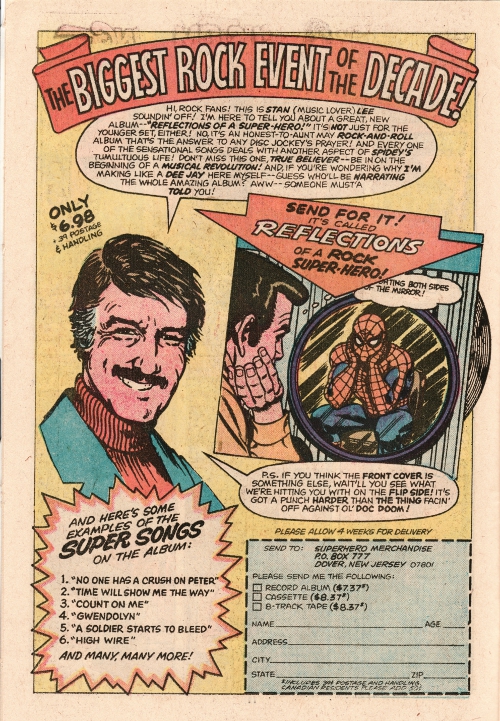 Note that you could purchase it as a vinyl record, as a cassette and even as an 8 track tape.  Boy, I wonder how many of the 8 track tapes are still around?  Now, those have got to be rare!  The lp is not particularly tough to find, and generally you can pick one up off of eBay for a reasonable price and the lp was also released on CD in the year, 2000, celebrating it’s twenty-fifth (25th) anniversary!

That’s it for this week’s Fabulous Find.  Please come back next week for another of my RETRO REVIEWS.  Be seeing you …