Steve Ditko and the Legion of Super-Heroes 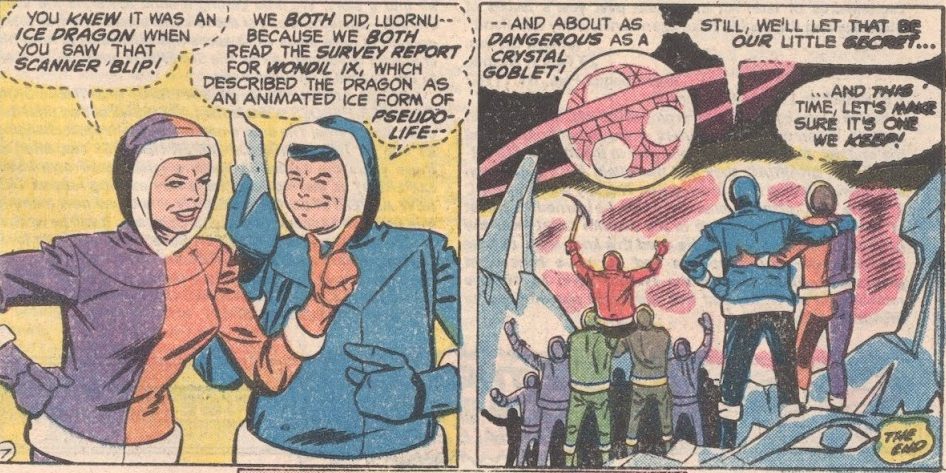 His first foray into the Legion history was a Bouncing Boy and Duo Damsel story entitled, “Once a Legionnaire” written by Gerry Conway, with Dan Adkins inking over Steve’s pencils.  The story was just a seven page back-up filler, but Ditko did a nice job showing Bouncing Boy using his powers.  I especially liked how he had him depower and slide down a snow bank at stop his own bouncing inertia.  But his attempt at an “ice dragon” looked too much like a dog, rather than a dragon!

His second back-up story was written by Paul Kupperberg and inked by Dave Hunt and was entitled, “The Grounded Legionnaires”.  This eight page story featured a Shadow Lass, Mon-El, Cosmic Boy and Brainiac 5 against a villain, Vibrex, Master of Vibration.  Ditko does a nice job, particularly with the panels featuring all four Legion members.

Apparently, the powers that be at D. C. Comics, liked what they saw in these two back-up stories, as editor Jack C. Harris assigned Steve to full stories beginning with issue # 268.  In the story, “Life After Life After Life” written by J. M. DeMatteis and inked by Bob Wiacek, Steve illustrates a story featuring Karate Kid, Dream Girl and Chameleon Boy facing off against Doctor Mayavale.  I really dislike the design Ditko came up with for the villain in this story and overall his artwork appears stiff and posed rather than flowing and natural, at least in my opinion.

Issue # 272, featured “The Secret Origin of Blok”, written by Gerry Conway and inked by Frank Chiaramonte.  In this issue, Ditko’s ‘stiff artwork’ works, as Blok is a rock like being and should be portrayed as rigid and stiff.  Steve also does a nice job drawing the Legionnaire Wildfire.  His other Legionnaires are weaker, but as the story primarily gives Blok’s back story and tells of his joining the Legion, Ditko was an excellent choice to pencil this issue.

Issue # 274, tells the story of “The Exaggerated Death of Ultra Boy”.  It was written by Gerry Conway and Frank Chiaramonte again supplies the inks to Ditko’s pencils.  Ditko does a nice job drawing Phantom Lass and Saturn Girl, as well as, Karate Kid this issue, but the story primarily concerns Ultra Boy and his memory loss, as he serves under a space pirate and comes against the Legion.

Issue # 276, “Lord Romdur’s Castle” was also written by Gerry Conway and inked by Frank Chiaramonte.  The story takes place in a medieval setting and gives Ditko a chance to draw knights, horses and castles, as well as, five Legionnaires. There is nothing to really recommend the art in this issue, but I did like the way Steve drew Phantom Girl’s hair while in her phantom state, which was different than how he drew her hair normally.  This was a nice touch and really set apart when she was using her powers, other than just the coloring of those panels.  I also liked the way he drew Chameleon Lad using his powers.

Which bring us to Steve’s last Legion outing, almost a year after issue # 276.  His last Legion art work appears in issue # 281 of the Legion of Super-Heroes, cover sated November 1981.  His last Legion work is on a full story entitled, “Madness is the Molecule Master”, which was plotted by Roy Thomas, scripted by Paul Levitz, inked by Bruce Patterson and under a new editor, Mike W. Barr.  Ditko gets to draw Superboy, as well as, his alter-ego, Clark Kent.  He does a very good job overall on this issue, with my favorite panel showing five charging Legionnaires on page 19.  He also does a good job drawing Phantom Lass this issue, during a four page sequence.

Based on his final issue, it seemed that Ditko was becoming comfortable with drawing the Legionnaires, and could have become a regular, or semi-regular Legion penciler, but that was not to be, as issue # 281 was the last Legion work that Ditko ever did.  I will admit that at the time the issues came out, I was not enamored with Ditko’s work on the Legion, but now looking back on those 142 pages of pencil work, I would have to say that he did a nice, though far from stellar job during his brief Legion assignments.  He never made the series his own, but he was not really on the series long enough to claim it as his own!