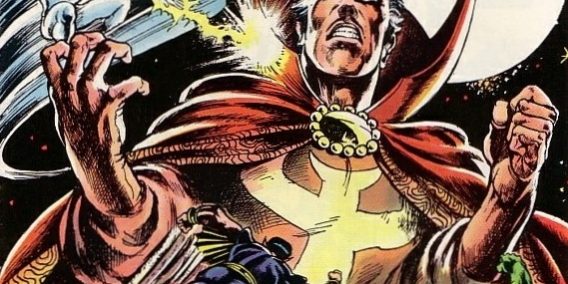 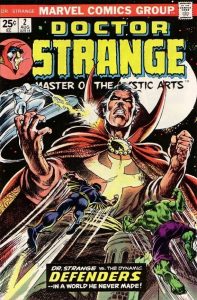 This is the second in a five part storyline running through Dr. Strange # 1 through Doctor Strange # 5 (though issue # 3 was primarily a reprint of Steve Ditko;s introduction of Clea).  The book showcases a beautiful Frank Brunner cover (Beside Ditko, I feel Brunner was the best illustrator of the good Doctor) featuring a gigantic orange garbed Doctor Strange (rather then the normal blue tunic) facing off against the original Defenders, the Hulk, Silver Surfer and Sub-Mariner.

The story has the villain Silver Dagger holding Clea hostage believing that he has killed Stephen Strange in issue # 1.  In actuality, Stephen, or his astral self, minus his body, is very much alive and on a quest to escape the Orb of Agamotto, where he has been drawn against his will.  He meets up with the Silver Surfer, who serves as a sort of Spirit guide.  The issue contains a great two-page centerspread where we wee Doctor Strange’s body serving as the Christ figure in Da Vinci’s painting of The Last Supper.  Other Marvel characters serve as Disciples, such as, Spider-Man, Sub-Mariner, Hulk, Hawkeye, Nick Fury and even Ant Man.

Doctor Strange is forced to battle the Defenders and upon their defeat, it is revealed that his real foe in this land of unreality is … wait for it … Death!

But that’s another tale, for another issue of … Doctor Strange, Master of the Mystic Arts.