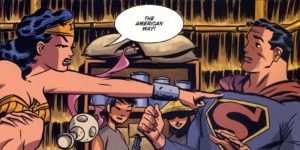 Welcome back to Strange Times & Places, where we’re looking at the second of the two all-time classic Cold War-set DC Comics Elseworlds: DC: The New Frontier!

It’s a Royale With Cheese and the best way to describe this mini’s timeline is “The DCU’s Post-Crisis timeline, but in real world time”. Barry Allen is directly inspired by Jay Garrick and they coexist in the world…of the 1950s.

It’s a tumultuous time: America’s government (and most of its people) have turned on the masked mystery men that protected them during World War II, teams of non-costumed adventurers (like The Challengers of the Unknown and the Suicide Squad) have stepped in to replace them, and a new generation of superhero (including The Flash and Green Arrow) has started making the scene. This social upheaval will come to a head when a cosmic horror known as The Centre threatens all of mankind – will America rise to the challenge or go extinct?

Ending on a transcript of JFK’s “New Frontier” speech, this mini-series is an excellent counterpoint and spiritual sequel to The Golden Age. Whereas that title dealt with the slide into jingoism and paranoia of the 50s, this series took the suggestion that the Silver Age would bring better days and ran with it – not by making things “all right” again, but showing that things can be if we work for it.

Come Back Next Week for Another Installment of Tokusatsu Gesundheit!