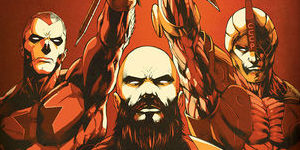 Welcome back to Strange Times & Places, where this week we’re going back to the USSR! A little while back, Valiant Entertainment did their own riff on the Age of Apocalypse with Divinity III: Stalinverse, but we’re focusing on the tie-in one-shots collectively called Divinity III: Heroes of the Glorious Stalinverse.

It’s a mix of For Want of a Nail and Imaginary Story. As to the former, it’s a world in which the USSR dominated the world where Joe Stalin took power a little early and lead the Soviet Union in multiple wars of global conquest. As to the latter, it’s a world created a Soviet cosmonaut who gained godlike reality warping abilities, meaning it’s timeline is not required to make total sense.

In Divinity III: Komandar Bloodshot #1, the USSR’s greatest super soldier must fight his way through an attempt by the American Resistance to take him off the board!

In Divinity III: Aric, Son of the Revolution #1, Aric of Dacia comes crashing out of the sky and into Soviet Rome! He quickly comes over to the Soviet way of thinking and joins the USSR as its single most powerful hero.

In Divinity III: Escape From Gulag 396 #1, young preacher Obadiah Archer makes a deal with the komandant of the gulag he’s imprisoned in: if he can make the prisoner known as Armstrong compliant, Archer (and his rabble rousing religious ways) can go free.

In a world where The Sect isn’t a secret world power, Obadiah Archer’s father is an honest man of God who raises his son to be a good man (rather than a cult-affiliated megachurch pastor who raises him to be an assassin). It means Archer isn’t the preternatural fighter he is in the Valiant Entertainment Universe, but his indomitable will is focused on going good.

Shadowman’s story goes into the most detail about how the hero’s life is different in the Stalinverse and gives him a good reason for joining the Soviets: he’s brainwashed.

Bloodshot’s story, other than him still being a government pawn, shows little difference from the mainstream timeline.

Aric of Dacia doesn’t require much convincing, other than being overpowered by the Soviet Army, to join up as a loyal agent of the USSR. Seeing as his mainstream counterpart fought governments around the galaxy to free his Visigoth people – definitely a victim of the “realty warping doesn’t need to make sense” trap.