Strange Times & Places: He-Man & The Masters of the Universe in “Lifetime” 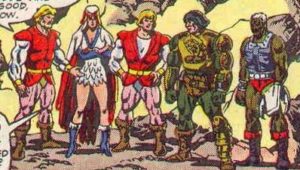 Welcome back to Strange Times & Places, where I’m warning you ahead of time that you’re getting two of these in a row (I’m going on vacation and these are easy to find time for). I misspent my teen years moderating THE He-Man & The Masters of the Universe fan forum, so I’m looking to issues #12 & #13 of the Marvel/Star MOTU comic for this week’s entry. Incidentally, a new He-Man collection came in recently and was loaded into our front showcase…I wonder why my teenage fandom has come back with a vengeance?

This is more or less a For Want of a Nail story. A somewhat angsty Prince Adam inadvertently sends the Sword of Power into the future and follow to retrieve it, finding a future where Skeletor has succeeded in conquering in Eternia. 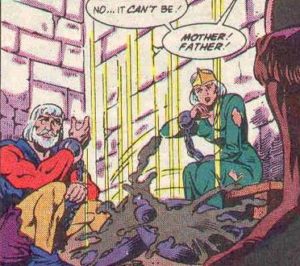 Arriving in the future, Prince Adam is quickly arrested and tossed into Prison Mountain (formerly Skeletor’s HQ at Snake Mountain). He discovers his parents rotting in a cell and ultimately escapes alongside an Errol Flynn-esque prisoner named Andras with the aid of the nearly powerless Sorceress (who expends her life force freeing him). Andras brings the young Adam to the remaining Heroic Warriors – Teela (following in her mother’s footsteps as Sorceress), a gray haired Clamp Champ, a new Man-At-Arms (OK, that’s Andras), and…a middle aged Prince Adam. They take the young Adam’s arrival as a sign that it’s time to take the fight to Castle Skeletor (formerly Castle Grayskull) and restore freedom benevolent monarchy to the land.