Fabulous Find: Going All The Way 45 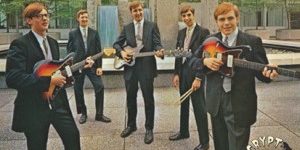 Welcome back everyone, so glad to see you once again.  This will be my third in a row musical Fabulous Find.  I’m having fun unearthing all this great music and sharing it here with you, and I hope you’re enjoying it too.  This time out I’m sharing a great little song that really got no airplay to speak of, at the time of it’s release.  And that’s a real shame, because it’s a really great song!  That song is, Going All The Way by The Squires.  It finally got some love and attention when it was included in the Nuggets collection of garage gems.  But that did that didn’t do any good for the original band, which were no more by that time.

The band formed in Bristol, Connecticut in 1965 and comprised high school friends Michael Bouyea (Drums, guitar, vocals), Thomas Flanigan (lead guitar, vocals), Kurt Robinson (organ), Jim Lynch (rhythm guitar) John Folcik (bass).  They were originally known as The Rogues, under that name they released one single, “It’s the Same All Over” on a local Connecticut label; Peyton, and started to build a strong local following.  Later Folick and Robinson were replaced by Brian Blake (bass and vocals) and Paul Shea (Organ and vocals).

In April 1966 they drove to New York City and booked time at Capitol‘s studios, their main aim being to re-record their first single, but also recording several more songs at the same time, including Bouyea’s “Going All the Way”.  Atco Records liked their material, but insisted on a name change to The Squires, and “Going All the Way” was released in September 1966.  And sometime during 1967, the band broke up and the individual members went their own way.

Here is the original 45, on Atco Records: 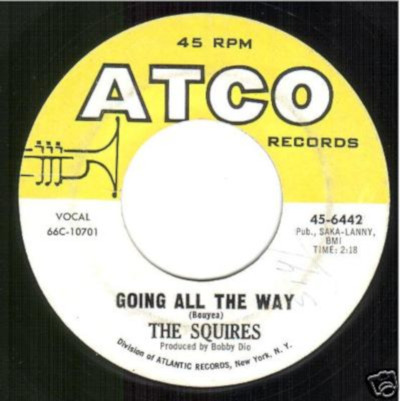 Going All The Way on Atco

Here is the song, via YouTube:  https://www.youtube.com/watch?v=Jd8F3bq8Ako  Sorry, but you’ll have to copy and paste this link into your browser, as I could not get it to be an active link for some reason!

That’s all for this week, but please return next week for a new RETRO REVIEW and the following week for a new, maybe non-musical Fabulous Find.  Be seeing  you …