Welcome back to Scripting Errors, where we look at movies that might have been! In honor of Halloween this week, we’re looking at one of many drafts of the flick that would become 2003’s Freddy Vs. Jason, this one in particular entitled…Jason vs. Freddy. 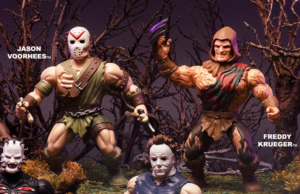 This draft was written by Ronald D. Moore & Brannon Braga, who at this time would still be on their Star Trek hot streak at the time. The duo served as producers on Star Trek: The Next Generation, Star Trek: Deep Space Nine, and Star Trek: Voyager, writing numerous episodes of each as well as the first two Next Gen flicks. Moore has since become better known for his partner-less work on Battlestar Galactica.

An unlucky break for a land developer leads the FBI & Crystal Lake Sherriff’s Department to the rotting backwoods cabin where notorious mass murderer Jason Voorhees has hidden for years. Arresting the lumbering psycho-killer, Jason is charged with a mind-boggling number of murder charges and is represented by public defender Ruby Jarvis. As she seeks to build some kind of defense for her frankly indefensible client, Ruby discovers there may be more to Jason’s life than anyone knows…including ties to the “Springwood Slasher”, Fred Krueger.

Overall, this script would have made for a pretty damn good horror movie but was emphatically not right for where the franchises were by the mid-90s. It would have been a down to Earth story in two franchises, really a whole genre, that had gone bat crap insane by the 1990s (witness the whole “Jason is a demon worm” thing in Jason Goes to Hell: The Final Friday and the Tom Arnold & Roseanne Barr cameo in Freddy’s Dead: The Final Nightmare). It might, however, work in the universe of the reboots…which are unfortunately more than a decade old now.

Come back next week for a New Installment of Strange Times & Places!