I’m happy to see you made it back for a new RETRO REVIEW.  This week, from the Marvel Comics annex of the comic book vault, I have pulled out Thor # 200, cover dated June 1972.  The cover sports a great illustration, both penciled and inked by, John Buscema.   The story within is entitled; “Beware! If This Be … Ragnarok!”.  The story itself is written by Stan Lee, with a framing sequence written by Gerry Conway.  All of the art is done by the team of John Buscema on pencils and John Verpoorten on inks.

Here is that cover, as drawn by, John Buscema, with Thor facing off against his half-brother, Loki: 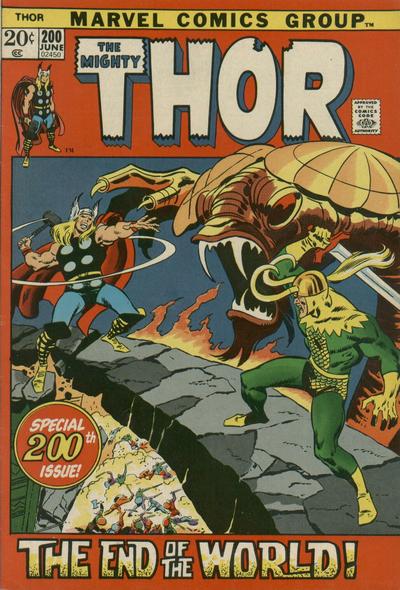 The comic is rather interesting, as the previous issue # 199 had the God, Pluto, holding an axe over an unconsciousness Thor, preparing to bring it down and end Thor’s life!  Issue # 200 begins with three “grim sisters”, who are actually the three Norns, looking down upon that scene within what is called; “the timeless twilight well”.

On this first framing page, one Norn seer says to the others, “Thor’s fate does not lay under Pluto’s axe, but in a more crucial future, on a day countless days hence!”  Then as you turn the page, this issues’ title is emblazoned across the page … Beware! If This Be … Ragnarok! and the story begins with Thor and all the warriors of Asgard being summoned before Lord Odin.  Even Thor’s half-brother, Loki, is brought forth.

Volla, the Prophetess, is brought in and she begins the tale of Ragnarok.  So what is Ragnarok?  Ragnarok is the final destruction of the world in the conflict between the Aesir and the powers of Hel led by Loki. — also called the Twilight of the Gods.  The coming of Ragnarok and long been mentioned and even foretold with the Thor comic book, but here, finally in 1972, Stan Lee, with the help of John Buscema, tells the story.

Over the next twelve (12) pages Volla, the Prophetess, describes and shows Ragnarok within her “vapors of time”, and we the reader finally learn exactly what Thor and company had been talking about for the last number of years.  The coming to an end for the Asgardian gods, through the lies and actions of Loki, as well as, Thor’s final battle with the Midgard Serpent and the death of the worlds at the hand of Surtur!

Then after another millennium, the rebirth of the world and the aborning of a new race of gods.  What artist supreme, Jack Kirby, envisioned as the death of the old gods and the birth of the new gods!  Though he had to go over to rival DC Comics, to tell that story!

This issue ends with the power of the Norns, shattering Pluto’s axe before it can strike Thor.  The rest of the story must wait till the following issue, Thor # 201 to be resolved.

I’m not sure what caused this story to be slipped between issues # 199 and # 201.  Was Conway late with his story?  Or did Lee just want to script one more Thor story before he gave up all his writing assignments?  Maybe fans had been deluging Marvel with requests as to what exactly Ragnarok was?  But whatever the reason, Issue # 200, was a great place to reveal the story of Ragnarok!  Nuff Said.

Hey, thanks for reading!  I appreciate your support and hope you enjoyed this RETRO REVIEW.  Check back next week for a new Fabulous Find.  Hang tight, til then.