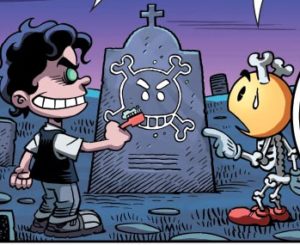 Welcome back to Strange Times & Places, where today we’re taking a faintly Halloween trip into the kid friendly with Lil’ Ernie #1!

Awful Ernie is a wannabe juvenile delinquent who “defaces” tombstones (with toothpaste), cheats on his homework (poorly), and breaks into a zombie family’s house Goldilocks style while is professional conscience, Smiley, tries in vain to keep him on the straight and narrow.

Speaking of Freddy, Come Back Next Week For a Halloween Edition of Scripting Errors!