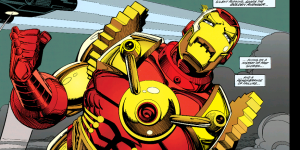 Welcome back to Strange Times & Places, where I am still stuck on giving you no context Endgame spoilers. This week, we’re reading Iron Man 2020 #1!

Hmmmm, Royale With Cheese maybe? It is set in one of Marvel’s many possible futures, specifically the cyberpunkesque future of…2020. Tony Stark is dead and his distant relative Arno Stark has taken over as both CEO of Stark International and Iron Man. Arno isn’t, however, a super-hero – he uses the armor as a gun for hire.

After his humiliating defeat at the hands of Machine Man, Arno Stark’s position at Stark International is in trouble. He takes a mercenary job from business rival Marcus Wellington for a quick cash infusion, something that he should be more up to handling. His mission is to rescue the Wellington’s daughter from a gang of terrorists holding her for ransom on private tropical island, but there is more going on here than Stark knows, machinations behind the scenes that could get Arno and his charge killed if they’re not careful…