How Brightly Does “Brightburn” Burn? 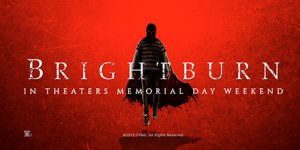 Welcome back, cool cats and fine felines! There’s a new comic book inspired flick in theaters as of this past weekend and it’s not based on any particular comic…but that doesn’t mean it’s particularly original.

Based on a screenplay by Mark & Brian Gunn (James Gunn’s cousin and brother, respectively), Brightburn is the story of a special little boy from Brightburn, Kansas. His parents, an infertile young couple running the husband’s family farm, have their prayers answered one night when an alien spacecraft lands just off their property carrying an infant boy. Thirteen years later, the boy is uncommonly smart and perfectly healthy…and more than a little “off”. He can’t seem to fit in with his peers, and he’s begun sleepwalking…to the barn, where the spaceship he doesn’t know about is kept. His parents are quickly going to learn that just because their little boy looks human, doesn’t mean he is human.

A Familiar Twist on a Familiar Story

To general audiences, this “what if Superman were a bad person” premise is undoubtedly a fairly novel twist. Comics fans will recognize it from Mark Waid’s Irredeemable, Alan Moore’s run on Miracleman, Marvel’s Supreme Power, Superman: Red Son, Superboy Prime, Injustice: Gods Among Us, etc, etc. That doesn’t mean it’s bad, of course, but it does mean it’s the kind of thing we’ve seen before.

Brandon Breyer, our non-human superhuman, reminded me of both Superboy-Prime (the powers and brutal, petty uses of them) and Harm (troubled kid from a loving family who breaks really bad). He is, I admit, a fairly novel addition to the world of big screen super beings – they are typically upright citizens, after all.

What It Does REALLY Well…

…is play the classic Superman powerset for horror. A thirteen year old boy, with all the hormones and selfishness come naturally at that age, with the powers of a god and the justified belief that he’s special, that he’s set apart from humanity, is a recipe for a creepy child that makes Damien Thorn look like Harry Potter.

Add to that the fact things like flight, super speed, super strength, and heat vision allow a body to ape a lot of plays from the Jason Voorhees/Michael Myers playbook with ease and you’ve got a recipe for nifty scare.

7/10, easy. Coming in to it as a huge comic fan, it (as you might have guessed) didn’t feel like the most original superhero idea ever put on screen. That said, it was a very effective horror movie subversion of the standard superhero tropes – something that New Mutants promised years ago and is increasingly unlikely to deliver.