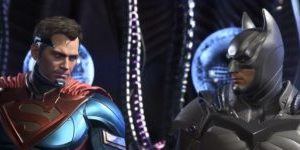 Welcome back to Strange Times & Places, where we examine alternate universe stories in all their shapes and sizes. Today, we’ll be spoiling the heck out of story mode from the newly released Injustice 2 video game!

It’s a For Want of a Nail story in which The Joker tricked Superman into murdering his own wife and unborn child. The Justice League proceeded to basically re-enact Squadron Supreme at that point, albeit with a much happier ending for Batman’s crew.

It’s been five years since Batman’s Insurgence overthrew Superman’s totalitarian Regime and the world is still slowly rebuilding. Batman has worked hard to rebuild public trust, forbidding reformed Regime members from super-heroics and recruiting new and trustworthy heroes to guard against the threat of the Regime’s resurgence. However, when a routine investigation into a new band of super-villains known as The Society unveils a connection to the Crisis-level threat of Brainiac, Batman’s team (Batman, Green Arrow, Black Canary, Harley Quinn, Blue Beetle, Firestorm, The Flash, Catwoman, and Green Lantern) and the Regime (Superman, Wonder Woman, Cyborg, Black Adam, Damian “Nightwing” Wayne”, and Supergirl) must put aside their differences to save the world.

Come back next week for a new installment of Tokusatsu Gesundheit!