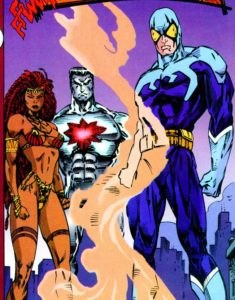 It, like all the Legends of the Dead Earth annuals, would be an Imaginary Story. It takes place in a possible future, year not given but distant enough that Earth is but a legend, where the legacy of Earth’s heroes has followed humanity in the colonies it set up as they left their home.

Captain Atom arrives from a quantum jump in the distant future to find the remnants of humanity and a bunch of other alien races living on War World, under the despotic metahuman grip of The Alliance. The Alliance is made up of his former Justice League International pals Booster Gold, Blue Beetle, Mr. Miracle, Martian Manhunter, Dr. Fate, Black Canary, Captain Marvel, and Guy Gardener….whic 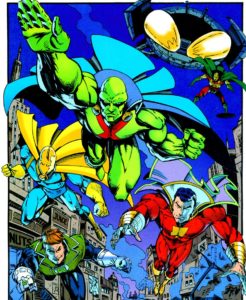 h is weird, since most of them ought to be dead. He will have to join forces with local freedom fighters in order to get to the bottom of this mystery and save humanity from his pals!