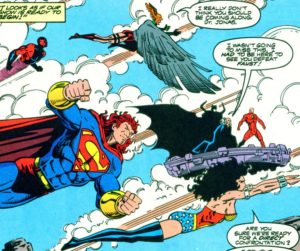 The Justice League of the Future

Welcome back to Strange Times & Places, where we’re sticking with 1994’s Elseworld Annuals by look at Justice League America Annual #8, “The Once and Future League”.

I would call this one another “For Want of a Nail” story, in which the original Justice League (with a very Pre-Crisis line-up) is killed by Felix Faust very early in their careers. This leads Faust to successfully conquer the world, ushering in a totalitarian era of “peace” 100 years on.

Will they succeed where their predecessors failed? What secret is Martin Jones hiding? Does the new Superman truly stand for Truth, Justice, & the American Way? Find out!

Come Back Next Week for ANOTHER Installment of Strange Times & Places!