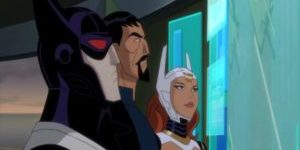 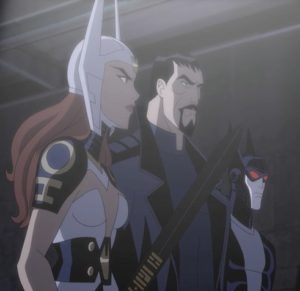 Welcome to Strange Times & Places, where super heroes are taken from their familiar surroundings and put into…strange times and places. We kick things off by looking at DC’s first outright Elseworlds movie, Justice League: Gods & Monsters.

It’s what I like to call a “Royale With Cheese”, a story wherein there’s no specific point of divergence nor is there a complete setting shift but instead there are many little differences that add up to something new. DC’s Trinity are the only heroes active, and they are a bit different from the expected. We have

The three of them form an anti-hero version of the Justice League, far more willing to violently intervene in fairly mundane wars and political problems than their traditional counterparts.

Super scientists the world over, all contracted by the U.S. government to devise counter measures for the Justice League, start turning up dead in ways that really point to the Justice League. Luckily for the world, the League isn’t in the habit of killing non-criminals – not that anyone believes that – and they’ll have to find the real culprits in order to clear their name. 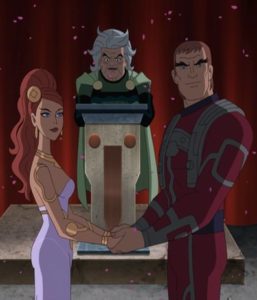 The movie does a really good job of establishing its world, from the major changes in Superman due to his altered parentage (both biological and adoptive) to the more subtle reason for a New God version of Wonder Woman (suffice it to say, Highfather’s not as all-loving in a world where there was no armistice Apokolips). The tie-in materials (a six issue mini-series and three animated shorts) are just gravy, adding extra bits of backstory and history to a well-established world.

It falls into the same trap that many Elseworlds tales do, freely killing off characters in large numbers. Every one of the ten scientists whose murders drive the story is either a superhero or supervillain in traditional DC continuity, and I dislike that storytelling technique as it limits what can be done with the world going forward – to whit, there would never be a Gods & Monsters version of Mr. Freeze because Dr. Victor Fries is dead without every taking a cryo bath.

Though that’s academic, as the second season of shorts (to introduce Green Lantern, Steel, and Mary Marvel) has been cancelled and there no other continuation plans.

NEXT WEEK: Tokusatsu Gesundeit returns with Frankenstein Conquers The World!

IN TWO WEEKS: We stick to the Frankentheme and read The Superman Monster!