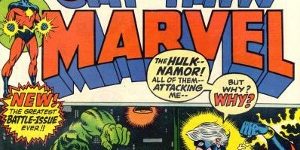 Okay, let’s just jump right into the thick of things for this week’s RETRO REVIEW.  I’ve pulled out of the comics vault, Marvel Comics Captain Marvel # 25.  It is cover dated March 1973, and it is the beginning of something special.

We all know how wonderful the 1960’s were to pick up Marvel Comics at our local drugstores, etc.  Frankly I love those mid to late 60s books.  The early ones are a little rough around the edges, until they finally found their groove, but things were beginning to slow down as Marvel entered the 70s.  Jack Kirby was gone over to DC Comics and Stan Lee was starting to pull back from his writing assignments and even from his editing job.  Other people were in charge, and it kind of showed, as books were started, or restarted, and then cancelled relatively quickly if they didn’t sell well enough.

Captain Marvel was just a marginal book in late 1972, early 1973.  Selling a fair amount of comics, but certainly no where near top selling book. But that was to change, when a certain young professional, originally hailing from the Detroit area, was assigned to Captain Marvel, beginning with issue number twenty-five (# 25).  His first issue, as I noted above, and his name was, and still is, Jim Starlin.

Here is that cover to his first issue as plotter and penciller: 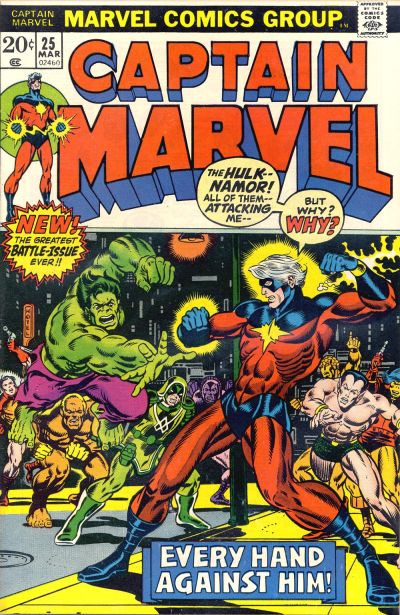 But really if you want to begin at the beginning, you need to first pick up issue # 55 of The Invincible Iron Man. This book was published the month (cover dated February 1973) before Starlin started on Captain Marvel.  In fact, I did an earlier RETRO REVIEW on this book back a few years ago.  Check it out, if you’re so inclined, here:  http://gobacktothepast.com/retro-review-iron-man-55/

This issue starts off with a bang, with the good Captain battling two blue skinned men, aliens or maybe robots!  He defeats them, but one of them manages to contact “the Masterlord” and both are teleported away.  The Captain and his host, Rick Jones, then carry on a mental conversation, as while Marvel is on Earth, Rick is held in the Negative Zone and vise versa.  It is the quantum bands that they both wear that when struck together effects the transition between the two realms.

The scene then shifts to the mysterious Masterlord, as he implements Operation Kree Crusher.  Of course, this master villain is only shown in shadow, so his real identity is not revealed until later in the series.  Back to Earth, where we see a policeman shoot a professor Savannah. Of course, the Captain and Rick Jones have an interest in that very professor.  So Cap and Rick exchange places, and Rick finds the deceased professor.  And he is quickly arrested for the professor’s murder, by the same policeman.

We also meet the professor’s niece, Lou-Ann, who, for some reason, confirms that Rick shot her uncle.  Rick is hauled away to a police station and put in an office to await the coming of an official.  But Captain Marvel urges Rick to trade places with him, and though Rick wonders why, he does as Cap asks.  And just in time, as Cap is attacked by Ronan the Accuser, then Megaton (who Cap fought in Captain Marvel # 23.  As he fights, his foes keep switching identities, soon he faces Yon-Rogg (his commander when Cap came to Earth on a mission for the Kree) , the Hulk, the Sub-Mariner, as well as, a few others of lesser stature.

Cap thinks he’s going crazy and he switches places with Rick one more time and Rick is captured by, the revealed two foes, the Super Skrull and another Skrull, Skragg.  They then report to the Masterlord of Captain Marvel’s defeat.  We, the reader find out the complete plan and see how it was used against Cap, but just when the bad guys are gloating, Rick stands up and proves that he and Captain Marvel are not defeated, by any means.

There follows a nice four (4) page battle with Captain Marvel fighting the Super Skrull.  Eventually the Skrulls make their escape and return to tell the Masterload of their failure, and Rick sets off to find the answers to what is going on, with Captain Marvel looking on from the Negative Zone.

This storyline began here, or actually in Iron Man # 55, and ran a full nine (9) issues, finally wrapping up in issue # 33 of this run.  Needless to say, each and every one of these issues are worth collecting and personally, I consider them all must haves!  Along with issue # 34, as well, as it’s that issue where Captain Marvel encounters Nitro.  And if you don’t know about the consequences of that confrontation, you’re no fan.  Trust me, you need that issue, as well as, this entire Stalin run.

So do you think I should do a two (2) month run of RETRO REVIEWs on each of these issues?  Hey, I could, and would be happy to do so.  Drop me a note, or a comment, and let me know!

Be back next week for a new Fabulous Find.  Hopefully, I’ll find time to write it, as I’m off to northern Michigan for a long weekend, in the morning!  So, I’ll see ya when I return!