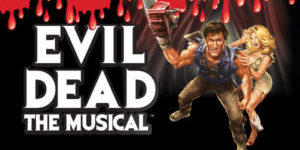 Of course you do! If you knew you wanted them, go here and click “Share” to put your name in the hat (make sure you share is set on “public” so we can see you shared it). If you didn’t know that, let us explain why you want them… 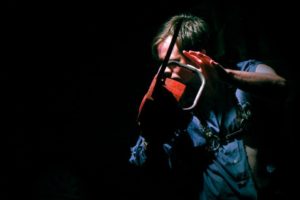 Evil Dead; The Musical is a loving musical parody of Sam Raimi’s classic horror film series Evil Dead.  It adapts the first two films in the series, Evil Dead and Evil Dead 2, with some iconic lines and sequences from Army of Darkness tossed in for good measure. The play also copies the ridiculous gallons of fake blood that are a standard for the series, ratcheting them up towards 11 and splattering the first five or so rows of the theater with more blood than some of the cast. The songs are catchy and the jokes are clever, rewarding but not requiring a familiarity with the original trilogy of films. 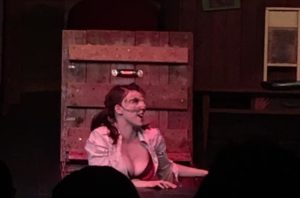 Our very own Pete Johnson has seen the show no fewer than six times while our Sunday/Thursday counter man (and stunningly witty blogger) Chris Walker saw it for the first time this season – both give it their hearty stamp of approval. This year’s cast, a mix of returning veterans and fresh faced newcomers, bring the material to life with unbridled enthusiasm, great comic timing, and a willingness to be half-naked on stage unknown to the average person. It’s a fun, horror themed evening perfect for an October night on the town.

How Do I Get Free Tickets?

Well, you do your old pals at Back to the Past a solid, that’s how: we’ve got an auction coming up with Wednesday night and we’d like your help promoting it! Everyone who goes to Facebook and shares this post promoting our next Americana Broadcast will get their name tossed into a hat, a name will then be randomly selected from that hat on Sunday 10/9, and the person that name belongs to will win a pair of tickets to see Evil Dead: The Musical at 8 PM on Thursday October 13th, 2016 at the City Theatre in Hockeytown Cafe downtown (we will contact the winner via Facebook). Many may enter, one will win, and that one can be YOU! Make sure you share is set on “public” so we can see you shared it – you can’t win if we don’t know your name. 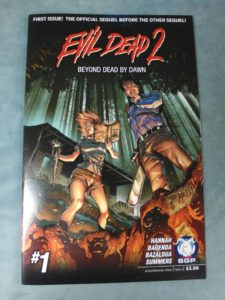 The auction has an Evil Dead 2 comic in it, coincidentally.

We thank you for your assistance and we hope that anyone who doesn’t win still goes to see the show – it’s great!