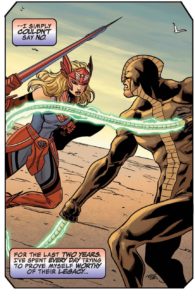 Captain America Vs. The Constrictor

Welcome back to Strange Times & Places, where today we’re looking at a video game time-in comic. Marvel Future Fight is a mobile game from South Korean studio Net Marble, and the comic Marvel Future Fight: An Eye on the Future expands on the origins of its signature original character.

It’s a For Want of a Nail story in which Captain America “survived” World War II and married Peggy Carter. It follows their daughter, Sharon Rogers, in her adventures as the second Captain America and an agent of SHIELD.

The comic follows Sharon as she dominates a training exercise against some SHIELD agents who don’t take her seriously, gets a new costume and weapons from Tony Stark, and is assigned a mission to the moon by Nick Fury. Upon reaching her objective, she’s confronted by the Guardians of the Galaxy and they’re getting ready to fight as the nine page story ends. 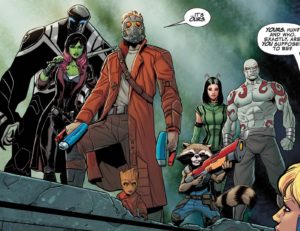 The Guardians of the Galaxy

Join me next week for a very special edition of Tokusatsu Gesundheit!