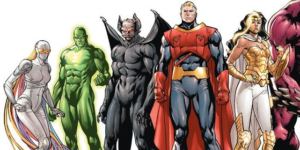 Welcome back to Strange Times & Places, where today we’re honoring the legacy of Stan Lee by looking at one of the most elaborate alternate realities ever conceived for comics – Just Imagine Stan Lee Creating the DC Universe!

By gadfree, this one’s hard to classify. Imaginary Story is probably the best existing category. 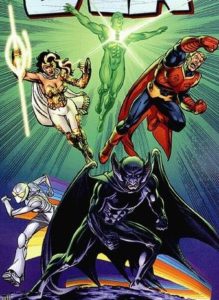 We’re looking at the first half of the mini-series today:

Just Imagine: Batman: Shortly after the murder of his police officer father, young Wayne Williams is framed for a crime he didn’t commit. He devotes his prison term to self-betterment (including physical training and education) and comes out the other side ready to take on the world. He makes a fortune as the mysterious masked wrestler “Batman” and uses that fortune to finance a variety of crime fighting gadgets, taking his costumed battles from the ring to the streets!

Just Imagine: Superman: Alien lawman Salden pursues brutal criminal Gundor Gorrok to an insignificant blue marble to avenge the murder of his wife. On our lower gravity world, both Salden and Gorrock possess fantastic powers: faster than a speeding bullet, more powerful than a locomotive, able to leap tall buildings in a single bound, etc.

Just Imagine: Green Lantern: Anthropologist Professor Len Lewis discovers and bonds with Yggdrasil, the legendary Tree of Life, and uses its power to become Green Lantern! He in turn is opposed by Reverend Darrk and the Church of Eternal Empowerment, who want that power for their own ends.

Just Imagine: Flash: College student Mary Maxwell’s life is changed when her father uses hummingbird DNA to cure her of a mysterious fatigue illness. She uses the resulting super speed powers to battle the terrorist organization STEALTH, who made the lives of her & her dad a living hell. 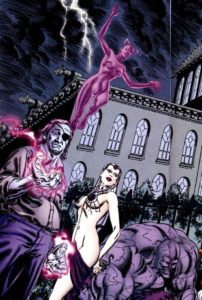 Come Back Next Week for the Second Half of the Mini-Series! 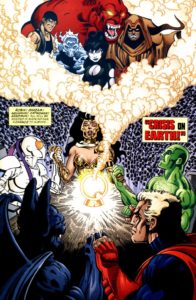 The JLA seeing things to come.