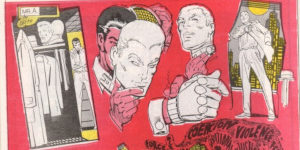 For this week’s Fabulous Find, I’m back in the fanzine annex and I pulled out this nice fanzine entitled; Mr. A.  It was published in 1973 by Comic Art Publishers and edited by Joe Brancatelli.  And for those in the know, Mr. A. is a character that was created by none other than, Steve Ditko.  Mr Ditko is responsible for both the writing and the artwork for within this publication, as well as the, cover illustration.

Here is that cover: 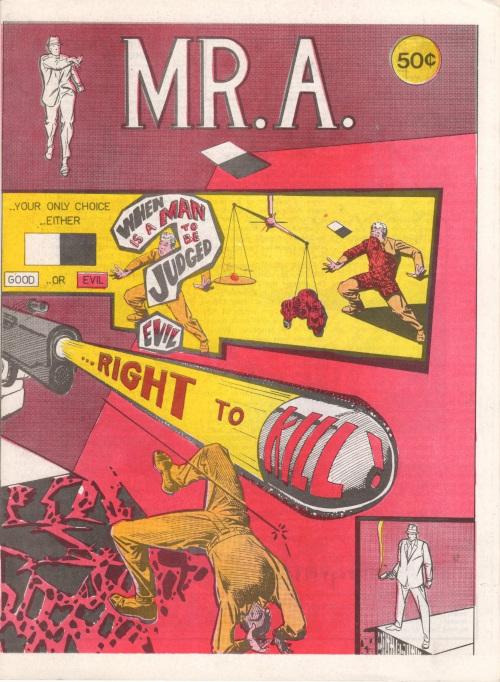 The fanzine features four (4) separate and complete stories, all starring Mr. A. and with everything, story and art, being completed by Ditko.  Including the covers the fanzine runs forty (40) pages.

As Brancatelli writes in the forward/editorial; “A is A.  That is all the explanation needed to describe Mr. A.  Unlike many of today’s contemporary heroes, he does not hide behind his words or mask his true feelings behind meaningless actions.  Mr. A., and his philosophy, is readily apparent.  It is as blatant ad it is honest”.

It is clear that Ditko had come to embrace the teachings and writings of author, Anne Rand, and he utilizes some of these philosophies within his Mr. A, stories.  Another word for this type of philosophy is “libertarianism”.  Some believe that another author, Robert Heinlein, was also a proponent of “libertarianism”.  I will not go into great detail, but in simple terms, followers believe that there is “good” and “evil” and no grey area between the two.  There is no shadings, as is represented by Mr. A.’s card, one half which is white and the other half, black.

Mr. A. is clearly not for everyone, in fact, I know a lot of fans who really dislike Steve Ditko’s Mr. A. stories, but I feel that they still have a value and are worth seeking out, even if you do not share the same philosophy!  This fanzine is well worth collecting for the four (4) Mr. A, stories contained within.  The color double page spread in the center is well worth owning itself!

I do want to mention one thing more before I sign out.  The stories within this fanzine are not the first appearances by Mr. A.  Ditko had Mr. A. stories published in a number of different fanzines in the late 1960’s and throughout the 1970’s.  In fact, the character first appeared in the fanzine; Witzend # 3 in 1967, then again in Witzend # 4 in 1968.  The character then jumped around within various other fanzines, like; Graphic Illusions, The Collector and Comic Crusader, all before this fanzine was published in 1973.

Here is the back cover of this issue: 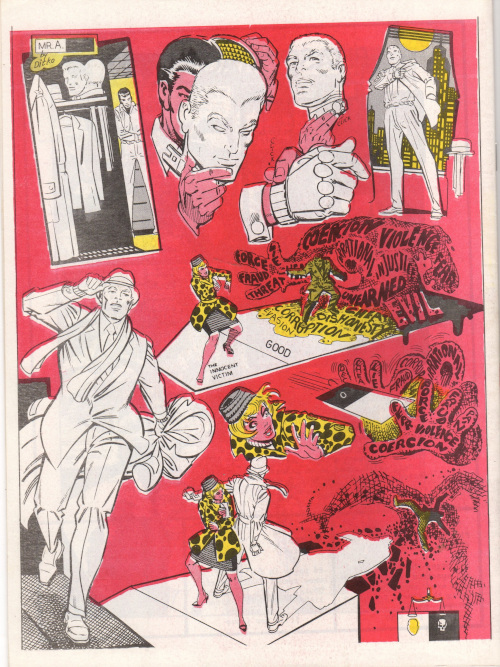 Drop me a note if you’d like to know more about Steve Ditko’s Mr. A.  And please return next week for a new RETRO REVIEW and of course in two weeks for another new Fabulous Find.  be seeing you …