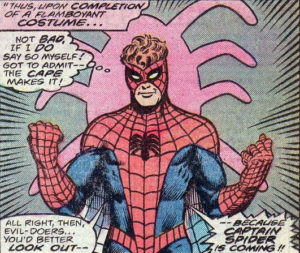 Where is the best place to sell my comic books near me?

Like pretty well every issue of Marvel’s What If?, it is a For Want of a Nail story in which some change of circumstance butterfly effects the larger Marvel Universe. In this case, it’s that the egocentric but ultimately good-hearted Flash Thompson gets bitten by a radioactive spider. 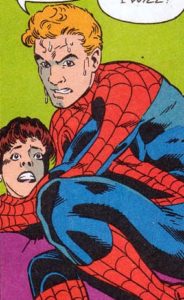 The Spider, without his mask.

In What If? #7, Flash Thompson drags his two dates to the radioactivity demonstration Peter Parker told him about because, hey, it’s free. He’s bitten by the radioactive spider and quickly begins using his brand new powers to impress his dates, culminating in impulsively jumping into the ring with Crusher Hogan…where he accidentally snaps the wrestler’s neck. Running from the police, Flash decides to atone for his sin by creating a costume and foiling criminals as Captain Spider. He does well until he battles The Vulture, who promptly drops him to his death.

In What If? #76, Flash goes straight up evil. He cons Peter Parker (who happens to know his secret) into building him a costume & gadgets before embarking on a life of costumed super-crime as The Spider. Peter develops Doc Ock-style arms and other anti-spider gadgets to bring him down, taking the name Spider-Man in doing so.

And in this year’s model, Flash Thompson is active as a heroic Spider-Man…who knows not the value of restraint or responsibility. His treatment of criminals is nothing short of brutal and blames ex-rival Peter Parker, now a freelance photographer, for the public’s resulting distrust of him. Circumstances arise that force him to take a long, hard look at why he feels he’s a hero…and admit that he really hasn’t been. 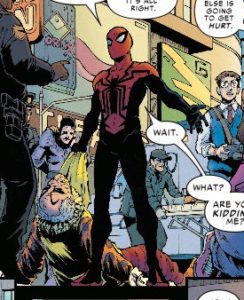