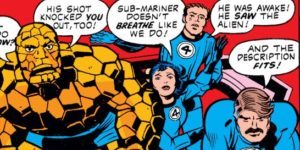 Welcome back to Strange Times & Places, where we’re a bit bummed about the sad, strange saga that Stan Lee’s golden years are turning into. To that end, we’re looking back to a simpler time and a happier reality – What If? #11, What If the Fantastic Four Were the Original Marvel Bullpen?!

Well…real people have superpowers and coexist with the characters they write.  Doesn’t get much more imaginary than that. 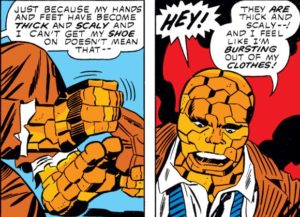 A mysterious package is sent to the Marvel Bullpen by a loony fan. When opened, that package bathes them in artificially generated cosmic rays that change their bodies and give them superhuman abilities: “Smilin’” Stan Lee becomes the elastic genius Mr. Fantastic, “Fabulous” Flo Steinberg becomes the uncanny Invisible Woman, Sol “Who’s He?” Brodsky gains the powers of the high flying Human Torch, and “Jolly” Jack Kirby gains the rocky exterior of The Thing! They begin adventuring to solve the mystery of who sent them the box, and fund their activities by producing a heavily fictionalized comic book version of their adventures.

Come Back Next Week for a Brand New 1 out of 5 – Would Recommend!