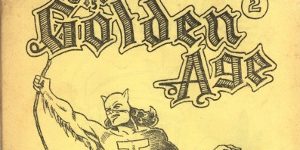 Welcome back to a new Fabulous Find.  This week  I’ve pulled out another terrific fanzine from my collection, it is The Golden Age # 2, published in 1966 by G.B. Love.  Love was very involved in comic fandom during the early days and through the sixties.  He is probably most well remembered as the publisher of The Rocket Blast Comic Collector or RBCC!

But back to The Golden Age.  It sports a very nice cover drawn by super-fan Biljo White, himself a super-fan and publisher of the fanzine Batmania, as well as, other fanzines in the sixties.  I’ve written about his creation, The Eye here, as well.

Anyway, here is the cover to The Golden Age # 2: 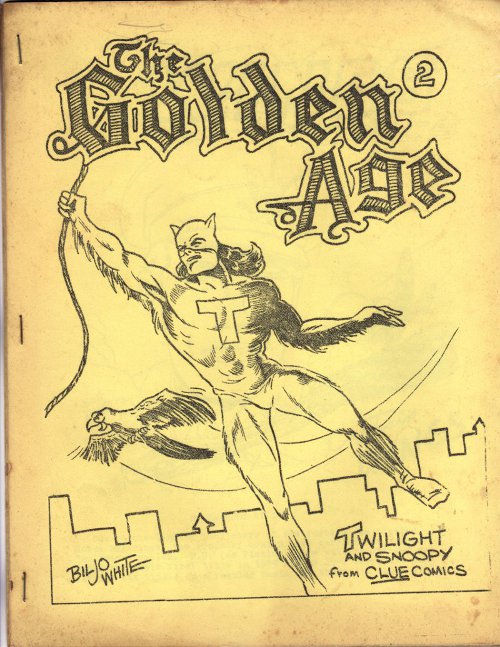 Personally, I have never heard of Twilight and his bird, Snoopy, before receiving this fanzine.  As you might guess by the cover, it generally covers comics and characters from what we now call the Golden Age, from the thirties up through about mid fifties.  Most people seem to agree that the Golden Age ends and the Silver Age begins roughly with DC Comics publication of the new Barry Allen, Flash in Showcase Comics # 4 in 1956.

Twilight was published by Clue Comics, and there is a nice article regarding this comic book published within written by well known comic historian, Raymond Miller.  In fact, Mr. Miller has more than one article in this fanzine.

He writes the first article of the fanzine focusing on Wings Comics from Fiction House Magazines during the forties.  Next up is an article, from another well known fan from the early fandom, Tom Fagan.  He is reporting on the 1965 New York Comicon, which was put on my David Kaler.  This article is by far, my favorite of the fanzine.  I love the historical background on early comic fandom!

And possibly because of this con report, the fanzine gives us a Silver Age character, The Hulk, from Marvel Comics, as drawn by fan, Jim Jones, following the report by Fagan.  And here is that full page illustrartion for your viewing pleasure: 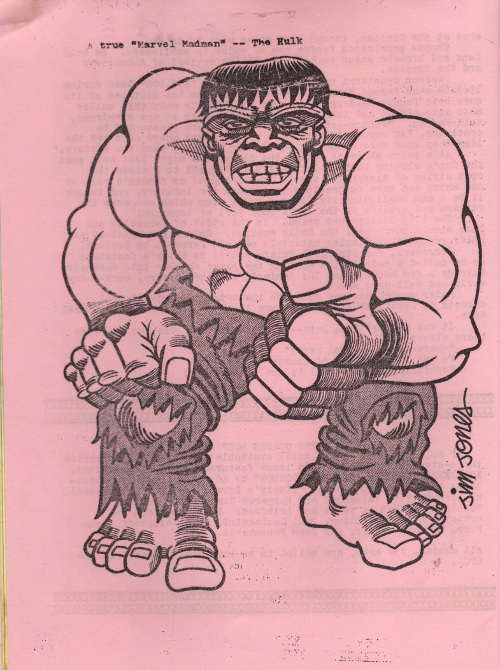 Now, based on the different colored paper of the cover and the Hulk page, I will mention that the fanzine is printyed using multi-colored paper; yellow, tan (though it might have been white originally, blue, green and pink.

Next, is another article by Mr. Fagan, this one entitled; “Thoughts of Youth … Long, Long Thoughts”.  The article focuses on what we now call Kid Gangs in comics.  And the article uses artwork provided by Ronn Foss of Captain Freedom and his helpers.  Also featured are the Four Comrades from Startling Comics,  and the Young Allies from Marvel Comics drawn by Biljo White, our cover artist, doing double duty.  Fagan also touches on Daredevil and his little wise guys (Foss again provides the artwork).  This by far is the longest article in the fanzine.

Following that article is “Recollections of a Comic Book Collector” written by Gene Krey.  In his article, he touches base with the following comics; Mickey Mouse Outwits The Phantom Blot, Captain America, as well as, the Captain Marvel series of comics.

The fanzine wraps up with the aforementioned Clue Comics written by Raymond Miller.  This fanzine provides a lot of information and was very useful to early comic fandom, providing information on the Golden Age of comic books for readers in the Sixties.  Actually, it’s still very useful to today’s fandom, as well.  I know I learn quite a bit about comics and comic book publishers that I did not know.  Therefore I’ll be looking for other The Golden Age fanzines in the future.

My time has run out, so I’ll say adios and wish all my readers the best and invite you to return next week for a new RETRO REVIEW and God willing and the creek don’t rise, I’ll be back in two weeks with a new Fabulous Find.