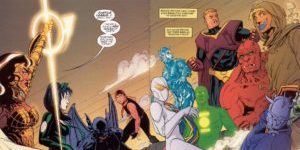 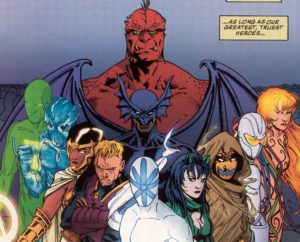 Welcome back to Strange Times & Places, where we’re wrapping up our look at Stan Lee’s efforts to recreate the DCU universe – Just Imagine Stan Lee Creating the DC Universe!

Imaginary Story, with dash of IRL For Want of a Nail.

Just Imagine: Robin: A surly young foundling named Robin has recently aged out of his orphanage and been taken in by the Church of Eternal Empowerment. He personally serves Reverend Darrk as an assassin and thief, but an encounter with Batman will make him question the righteousness of their cause.

Just Imagine: Shazam: Badass secret agent Carla Noral and her partner, gifted analyst Robert Rogers, are on the trail of a warlord named Gunga Khan. Khan’s forces kidnap Noral in an ambush and leave Rogers for dead, but he finds that the magic word “Shazam” can turn his nebbishy body into a powerful gargoyle!
Just Imagine: Catwoman: Professional model Joanie Jordan is struck by bizarre green lightning while fleeing with her cat from a home invasion by mobsters. She is given the proportional powers of a cat and uses them to take down the local mob boss! 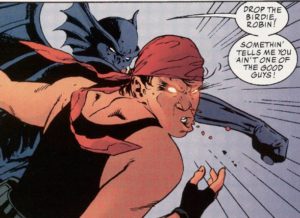 Just Imagine: Aquaman: Environmentalist Ramon Raymond is given fabulous hard water powers by a mysterious green underwater phenomenon and uses them to fight off the sinister forces of Reverend Darrk’s Church of Eternal Empowerment as Aquaman!

Just Imagine: Sandman: Astronaut Larry Wilton finds himself stranded in space and is saved when he discovers that the world of magic and wonder he had dreamed of all his life was real! The oracle Melana transforms him into the mystical protector of Dreamworld and Earth, the Sandman.

Just Imagine: Crisis: Wonder Woman brings together her Justice League teammates and Earth’s newest heroes to save all of reality from the mystical warlord known as Crisis! A hero will fall to the dark side and a new hero will rise before the world is safe!